Interaction Design (IxD) is the design of interactive products and services in which a designer’s focus goes beyond the item in development to include the way users will interact with it. Thus, close scrutiny of users’ needs, limitations and contexts, etc. empowers designers to customize output to suit precise demands.

What Designers Do – with the 5 Dimensions of IxD

For UX designers, “Interaction Design” is the axis on which our work revolves (i.e., the design of human interaction with digital products); however, the term also applies to understanding how people interact with non-digital products.

“Interaction Design is the creation of a dialogue between a person and a product, system, or service. This dialogue is both physical and emotional in nature and is manifested in the interplay between form, function, and technology as experienced over time.”

Learn more about the 5 factors of interaction design and the kind of work IxD involves.

Interaction designers utilize all five dimensions to consider the interactions between a user and a product or service in a holistic way. Specifically, we use them to help envision the real-world demands of a usership in relation to a design not yet introduced. For example, designers of an app that must process data at high speed in order to find results inside a mass-transit system (a subway/metro) will face accommodating the constraints of underground commuters – cramped spaces, fast journeys, dead zones, etc.

Interaction Design is a Part of User Experience Design 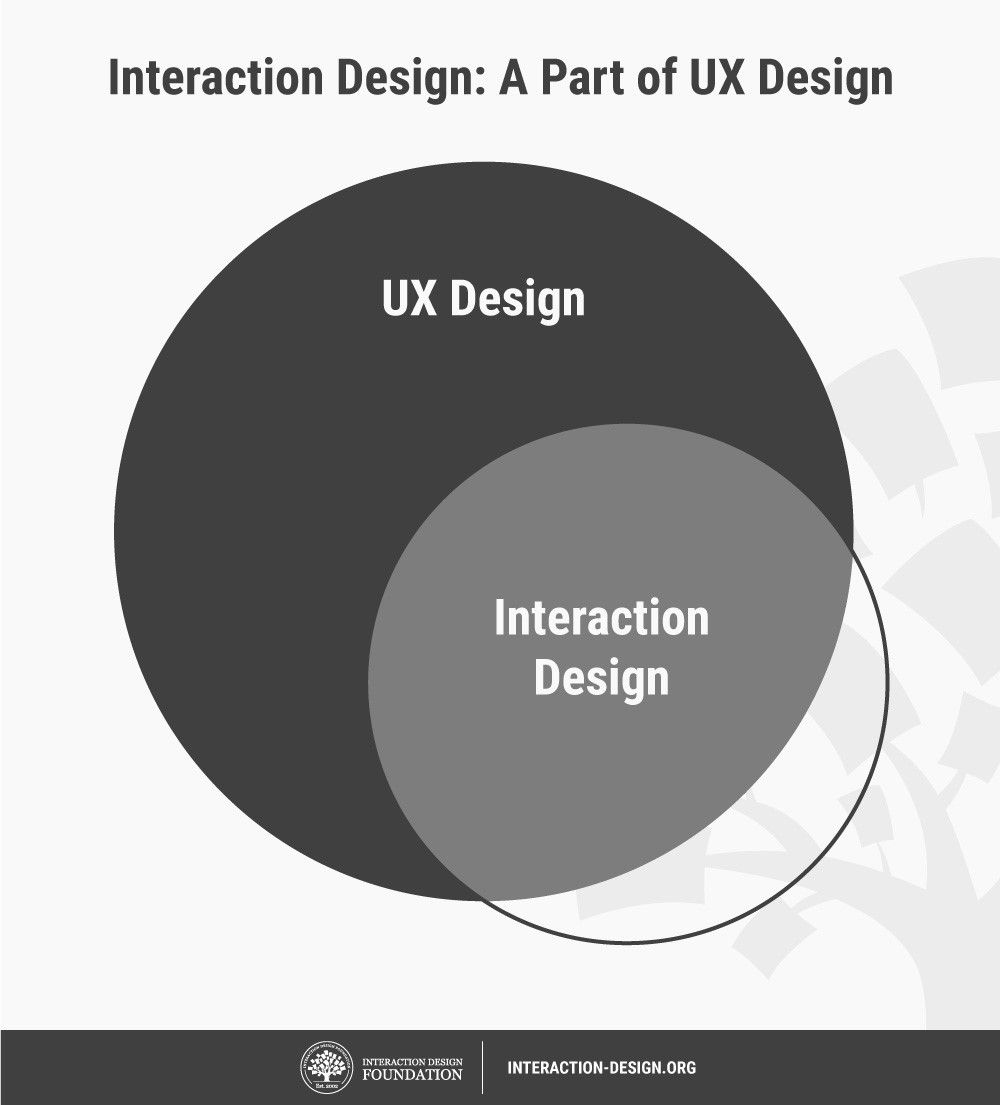 The term “interaction design” is sometimes used interchangeably with “user experience design”. That’s understandable, considering interaction design is an essential part of UX design. Indeed, UX design entails shaping the experience of using a product, and a big part of that experience involves the needed interaction between the user and the product. However, UX design goes far beyond that. UX designers’ working world is concerned with the entire user journey, including aspects of branding, design, usability and function. Conversely, the central role of “interaction designers” targets the moment of use and how to improve the interactive experience. Thus, interaction design, or IxD, is pivotal in the realm of the user experience, since the moment of use is the acid test of a design, where the designer’s manipulation of the five dimensions must offer users a satisfactory—if not better—experience. If users find themselves hindered by impractical features, such as text-heavy notifications or overlong animations, are put off by the aesthetics, or the responsiveness of the design fails to match their needs in the context, the design will fail, regardless of the brand behind it. The IxD of a product reflects its absolute value.

UX Matters has a great article by Kevin Silver on the 5 dimensions of interaction design – here: https://www.uxmatters.com/mt/archives/2007/07/what-puts-the-design-in-interaction-design.php

You can learn much more about what interaction design is and how to design interactions in the Interaction Design Foundation’s online courses. Read more about the courses we offer – here: https://www.interaction-design.org/courses

A simple and useful understanding of interaction design

If this definition sounds broad, that’s because the field is rather broad: the interaction between a user and a product often involves elements like aesthetics, motion, sound, space, and many more. And of course, each of these elements can involve even more specialised fields, like sound design for the crafting of sounds used in user interactions.

As you might already realise, there’s a huge overlap between interaction design and UX design. After all, UX design is about shaping the experience of using a product, and most part of that experience involves some interaction between the user and the product. But UX design is more than interaction design: it also involves user research (finding out who the users are in the first place), creating user personas (why, and under what conditions, would they use the product), performing user testing and usability testing, etc.

The 5 dimensions of interaction design

Words—especially those used in interactions, like button labels—should be meaningful and simple to understand. They should communicate information to users, but not too much information to overwhelm the user.

This concerns graphical elements like images, typography and icons that users interact with. These usually supplement the words used to communicate information to users.

Through what physical objects do users interact with the product? A laptop, with a mouse or touchpad? Or a smartphone, with the user’s fingers? And within what kind of physical space does the user do so? For instance, is the user standing in a crowded train while using the app on a smartphone, or sitting on a desk in the office surfing the website? These all affect the interaction between the user and the product.

While this dimension sounds a little abstract, it mostly refers to media that changes with time (animation, videos, sounds). Motion and sounds play a crucial role in giving visual and audio feedback to users’ interactions. Also of concern is the amount of time a user spends interacting with the product: can users track their progress, or resume their interaction some time later?

This includes the mechanism of a product: how do users perform actions on the website? How do users operate the product? In other words, it’s how the previous dimensions define the interactions of a product. It also includes the reactions—for instance emotional responses or feedback—of users and the product.

See how 5 dimensions of interaction design come together in the animation below:

So what do interaction designers do?

This is concerned with what the goal(s) of a user are, and in turn what interactions are necessary to achieve these goals. Depending on the company, interaction designers might have to conduct user research to find out what the goals of the users are before creating a strategy that translates that into interactions.

If you’re interested to find out more about interaction design, you can read Interaction Design – brief intro by Jonas Lowgren, which is part of our Encyclopedia of Human-Computer Interaction. It provides an authoritative introduction to the field, as well as other references where you can learn more.

Read more of our engaging literature and resources on interaction design

More about What Puts the Design in Interaction Design

Questions to consider when designing for interaction: The What & Why of Usability

A deep understanding of human psychology is essential for all designers when creating a user-centered product with great user experience. While many individual differences will never cease to exist between users, we are united by our shared psychology; the constraints and abilities of the human mind are much the same for all of us. Developing an understanding of these cognitive limitations and capabilities is the key to interaction design and a great user experience. Without an awareness of how we interact with things in the real and virtual worlds, you’ll find that your designs will fall short of their potential.

This course will equip you with the knowledge to relate to your users psychologically, thus allowing you to create stand-out products. Through learning about different aspects of human cognition—and how they relate to interaction design—you will find yourself much better equipped to put yourself in your users’ shoes, shifting their thoughts to the forefront and keeping a firm hold of them there when designing your next creation.

Human Computer Interaction - brief intro
Human-computer interaction (HCI) is an area of research and practice that emerged in the early 1980s, initially as a spe Book chapter
Read book chapter

Usability Evaluation
Put simply, usability evaluation assesses the extent to which an interactive system is easy and pleasant to use. Things Book chapter
Read book chapter

Product Thinking is Problem Solving
It can be easy to get bogged down in developing features when we get into user experience design. It’s not that features
Read

Using Mobile Apps – The One Thumb, One Eyeball Test for Good Mobile Design

Using Mobile Apps – The One Thumb, One Eyeball Test for Good Mobile Design
Mobile designs need to take into account the way that users work with a mobile phone. That means understanding that dist
Read