Human history and games are inextricably intertwined. Irrefutable evidence resounds down through the ages that fun and games are not frivolous pursuits per se—instead, they come naturally to us as essential parts of being alive. When you understand the evolution of games, you can begin to make intelligent choices about what elements of games you might want to include in your gamification designs.

A Dim and Distant Past

Have you ever been to the zoo? If so, you’ll most likely have sat and watched monkeys and apes for a while. It doesn’t take very much to see them at play. They’ll chase each other, throw things, jump on each other, and that kind of thing. Assuming, as seems likely, that human beings are just better evolved monkeys, it’s likely that we’ve been playing games for a long, long time. We were probably playing games before we learned to speak or even to stand on two legs.

That means we have no idea what the first games we played were like. However, we do have a good idea of the timeline of modern game development.

Dice aren’t a modern invention. In fact, they’re probably among the oldest known gaming tools known to man. During an excavation in Southeastern Iran, archeologists discovered a 3,000-year-old set of dice! We don’t know exactly what games those early Persians would have played with them, but the popularity of dice has endured throughout the centuries. 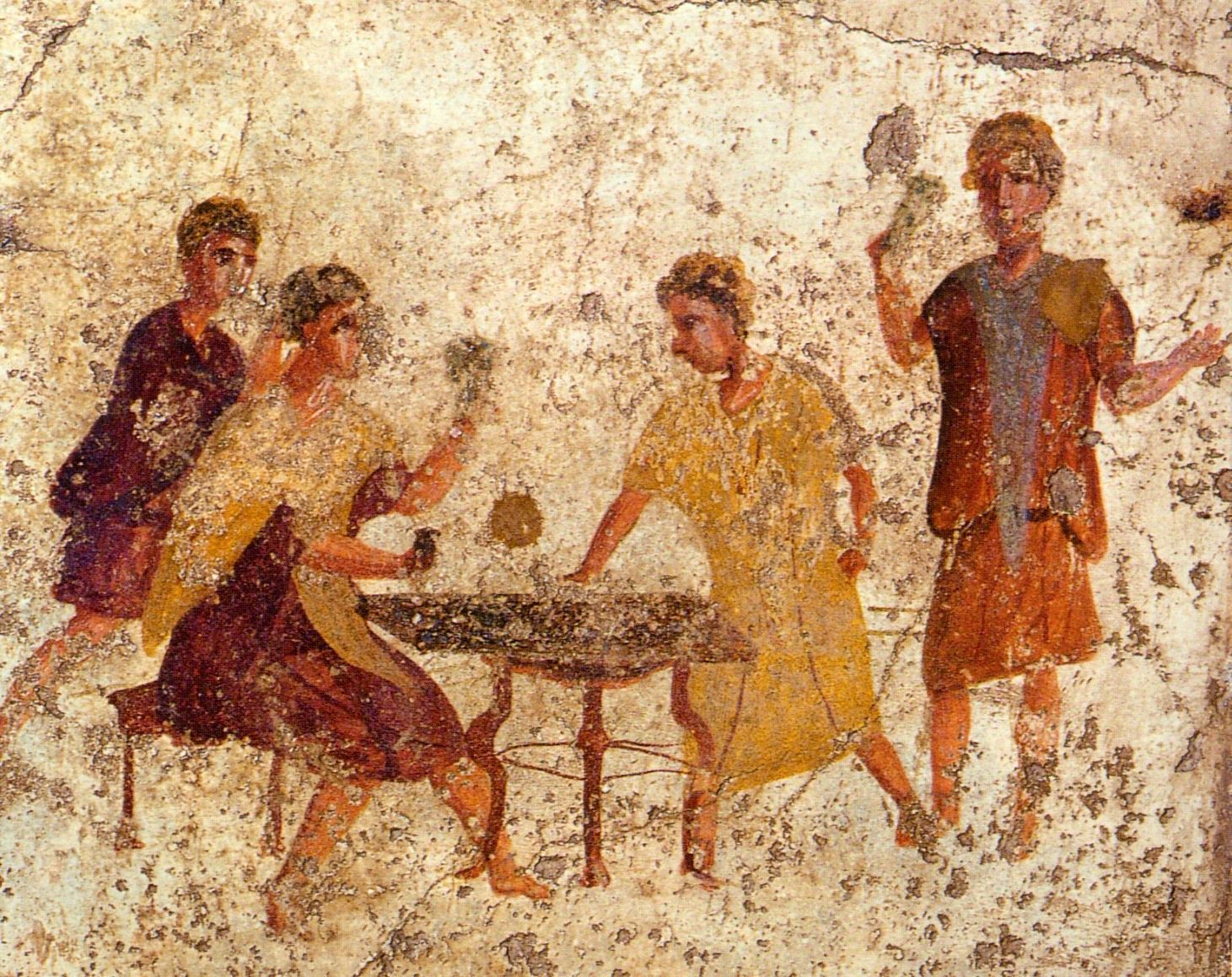 Dice games have been with mankind for a very long time, as you can see from this cave painting.

In 14th-century England, people were playing a game called Hazard (it’s mentioned in that famous work The Canterbury Tales by Geoffrey Chaucer), and Hazard didn’t fall out of favour until the 19th century. It had a very complex rule set and has since been supplanted by dice games with simpler rules.

Whether carved in bone or cast in plastic, the simplicity of a die—a cube with dots and nothing more—as an effective, if chancy, determinant is ageless. You may not know this, but the most popular game in casinos would remain—well into the 21st century—a dice game. Craps is the only game in a gambling house where the odds are in favour of the gambler. Despite this, it’s the most profitable game for the casinos; people don’t seem to know just when to stop playing. And play they do—elsewhere, too, using dice in a range of fun-filled activities that have been extending into less adult settings, such as homes and schools, through the years. Yahtzee revolves around dice, and not for nothing does Dungeons & Dragons incorporate dice, even if many of those dice have 4, 10, 12, 20 or even more faces.

There are references to tile games in China that are over 2,900 years old. Dominoes emerged 1,000 years later during the Song Dynasty (also in China). However, Western dominoes probably only began in the 18th century, and Mahjong (the most popular tile game in the world – it’s of Chinese origin) didn’t arrive until the 19th century.

Board Games are Even Older

If you enjoy a game of Monopoly or Scrabble, it would appear that you are in good company. The earliest known board games are 5,000 years old and were played by the Egyptians. We don’t know the rules of these games, but there is a “Senet” board that dates back to about 3500 B.C.!

The Chinese invented their first known board game in 200 B.C., and, in Western Europe, they were playing Tafl (a game very similar to chess) from 400 B.C. 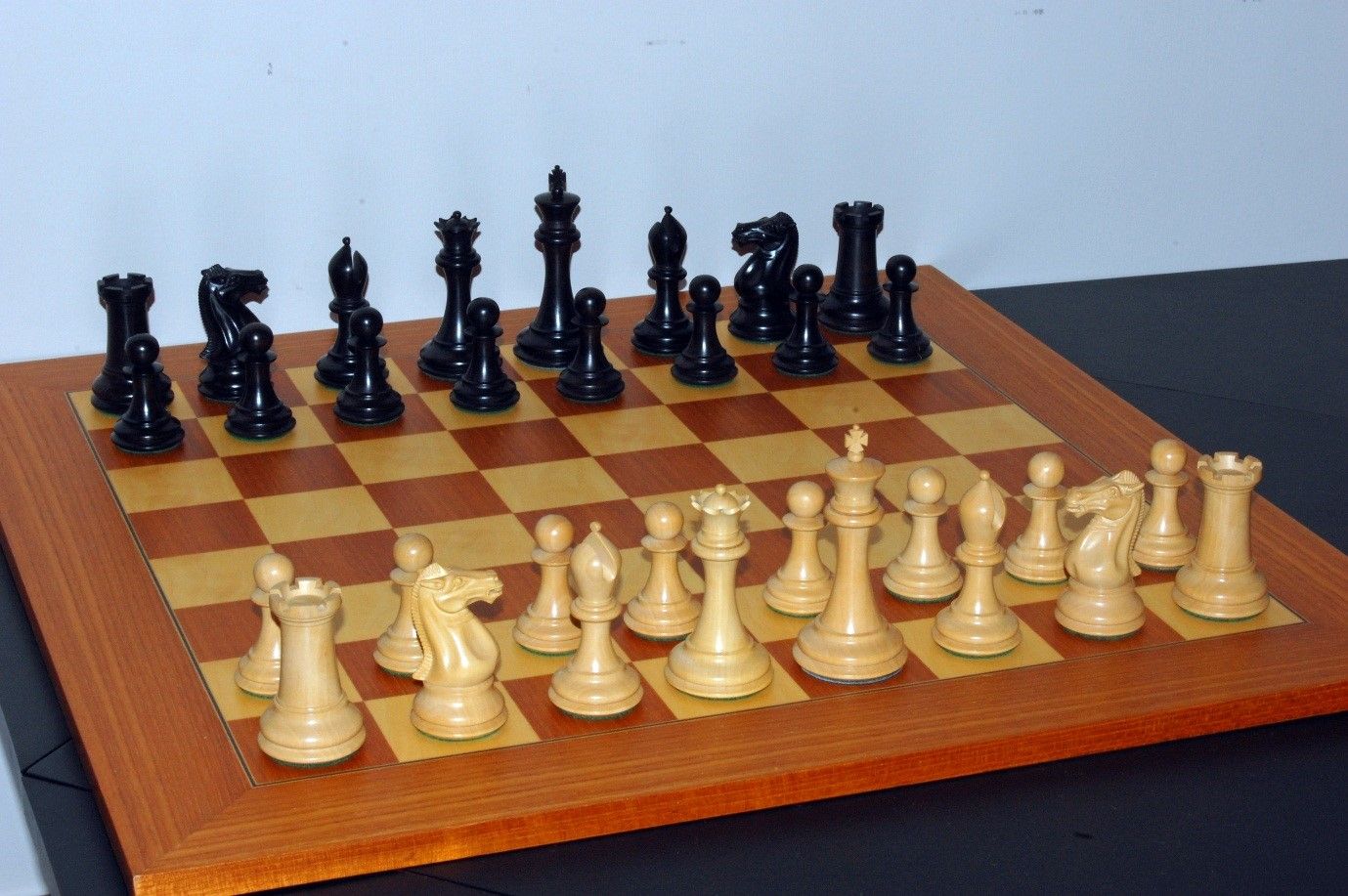 Chess is often considered to be the “archetypal” board game and is itself very old, but there were board games well prior to the invention of chess.

If you’ve ever played Go, Chess, Backgammon or Nine Men’s Morris, then you’ve played a game with more than a thousand years of history! Go is from 200 B.C. in Korea, Backgammon from Iran around 600 A.D. (complete with dice), Chess from India around the same time and Nine Men’s Morris may be from Mediaeval England, but many think it stems from the Roman Empire!

Snakes and Ladders, one of the world’s most popular children’s games probably began in India in the 16th century. And, surprise, surprise, dice power the probability for players in that game, too.

The first commercial board game arrived in the year 1800 and was produced by George Fox in England. It was called the Mansion of Happiness and was essentially a “race game” similar to Ludo. The oldest surviving board game company is Milton Bradley (whose famous games include; Downfall, Hungry Hippos and Connect 4), who were formed in 1860! 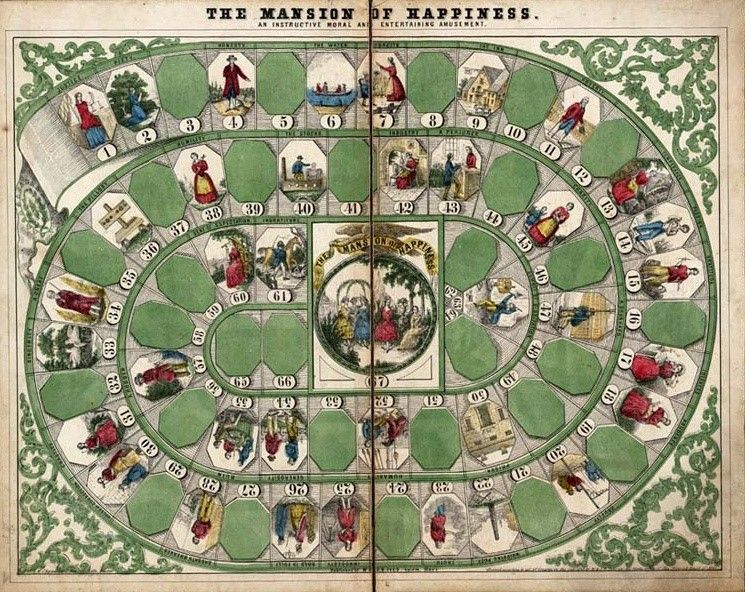 The Mansion of Happiness was the very first board game to be produced commercially (i.e., on an industrial basis).

Card games are a more recent invention, and the first use of a card deck was probably in Ancient China. They would have been played during the Tang Dynasty (6th century A.D. – 9th century A.D.). Cards reached Europe in the 14th century, and early decks would have been very similar to Tarot cards, whose modern and classic mediaeval versions we can find online or in virtually any bookstore’s Mind, Body and Spirit section.

The four-suit (hearts, spades, clubs and diamonds) deck that we’re most familiar with was invented in France around 1480. The oldest card game that we still play is probably Cribbage, which came from the 17th century. Bridge didn’t arrive until the early 19th century.

In the 1990s, cards were revisited and games like ‘Magic! The Gathering’ were introduced and became incredibly popular. Card games would also extend to trumps—a classic favourite in British schools, featuring items from racing cars to spacecraft, Western gunfighters and horror monsters, in which players compare the statistics of their topmost cards, and win or lose accordingly.

Carom, is possibly the oldest table game (it’s very similar to tiddlywinks or shuffleboard), but no-one knows exactly when or where it came into existence. Pool, billiards and snooker are all relatively recent inventions, and roulette only arrived in the 19th century. 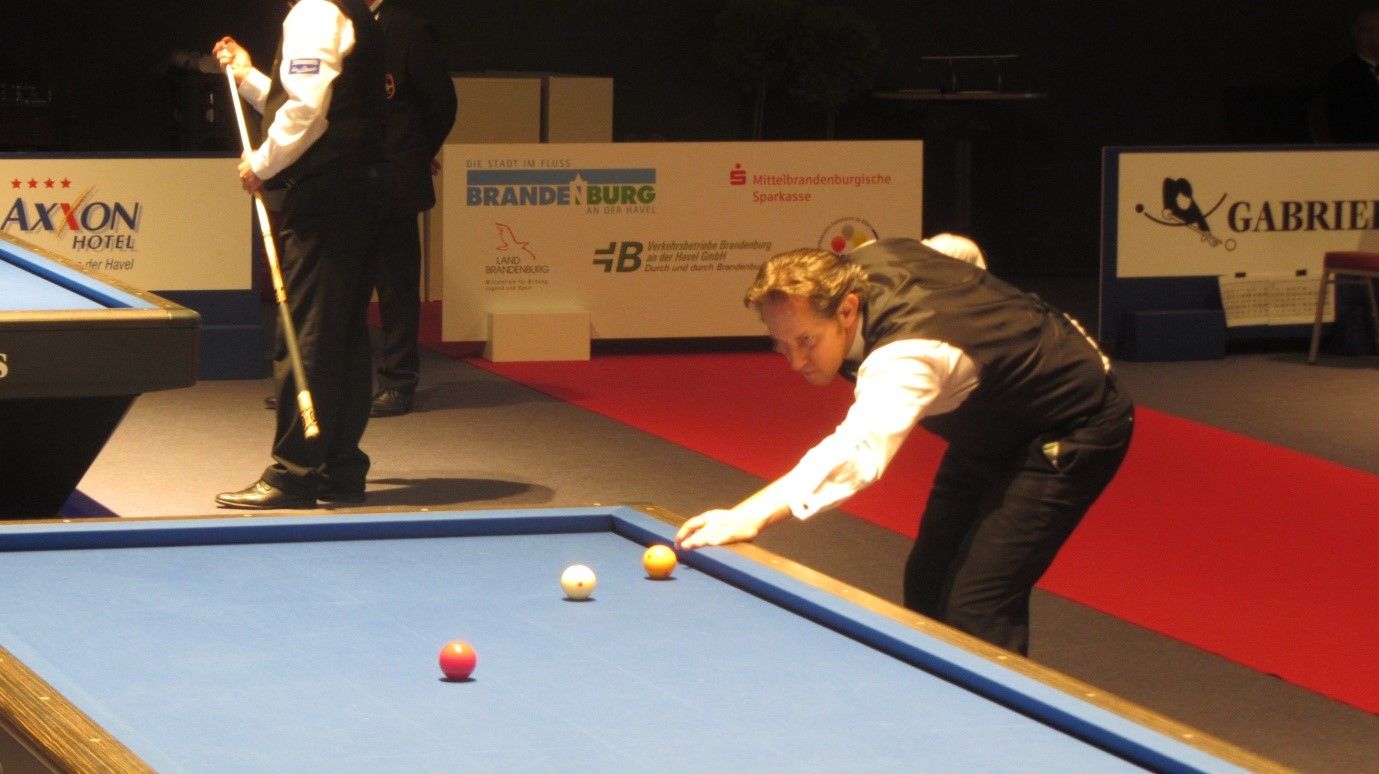 The game pictured above, may look (at first glance) like pool, but it’s actually a modern billiards table—as you can see by the lack of pockets on the table.

As you can see, games have a long rich history, and whenever you decide to play a game, you’re in good company. Human beings have been playing games throughout the centuries. They are part of the human experience.

What about Electronic Games?

You may be surprised to find that the first electronic game was invented in the United States before the computer! A patent was filed back in 1947 for a “Cathode ray tube amusement device”. In the 1950s, also in the United States, (very few) people began playing computer games on mainframe systems – these would have been out of reach for the vast majority of people as the hardware would have been astronomically expensive.

The first games console was the Magnavox Odyssey – released in 1972. Arcade games such as Space Invaders, Pacman, etc. began life in 1978 and became hugely popular into the early 1980s. During that time, quite a few consoles were released, but a crash in the American gaming industry killed off most of the companies involved in 1983. When the Japanese picked up the reins and began developing video games, console gaming became universally popular, signalling the slow downfall of the arcade game.

“Everyone has played video games at some point these days, and video games are fun.”
—PewDiePie, Swedish comedian and web producer

Games have a long history, as you can see, and the electronic game’s roots stretch right back to the earliest of human games. It’s not that our ancestors needed to tell us that games go with the territory of being alive; games are hardwired into our DNA.

Human history and games are inextricably intertwined. For millennia, people have held an innate compulsion to play, and that won’t change anytime soon. What they needed, they innovated, leaving us a wealthy legacy of devices through the centuries, ranging from the basic but powerful wonder of dice, to the timeless strategising involved in chess, and on up to a library of latter-day board games that run the gamut in their levels of sophistication. As long as you’ve got an understanding the evolution of games, you can begin to make intelligent choices about what elements of games you might want to include in your gamification designs.


The Institute of Play examines the history of games in a learning context here - http://www.instituteofplay.org/about/context/history-of-games-learning/

Join 282,746 designers who get useful UX tips from our newsletter.

Gamification is not the same as game design, because it adds game-like elements to non-gaming environments. However, the
Read article

For any gamification project, you’ll need to do research on players in order to determine what they will require from th
Read article

We’ve all come to think in terms of user-centred design over the years. It’s a critical component of UX design, and it h
Read article

One of the big questions facing us as gamification designers is, “When will your player get bored of your gamification p
Read article

Audrey Hepburn, the star of the silver screen, said, “The most important thing is to enjoy your life – to be happy – it’
Read article

Very, very few people truly want to work, do they? After all, if you weren’t working, you could be doing something you’d
Read article