What is Human-Computer Interaction (HCI)?

Human-computer interaction (HCI) is a multidisciplinary field of study focusing on the design of computer technology and, in particular, the interaction between humans (the users) and computers. While initially concerned with computers, HCI has since expanded to cover almost all forms of information technology design.

Here, Professor Alan Dix explains the roots of HCI and which areas are particularly important to it.

The Meteoric Rise of HCI

HCI surfaced in the 1980s with the advent of personal computing, just as machines such as the Apple Macintosh, IBM PC 5150 and Commodore 64 started turning up in homes and offices in society-changing numbers. For the first time, sophisticated electronic systems were available to general consumers for uses such as word processors, games units and accounting aids. Consequently, as computers were no longer room-sized, expensive tools exclusively built for experts in specialized environments, the need to create human-computer interaction that was also easy and efficient for less experienced users became increasingly vital. From its origins, HCI would expand to incorporate multiple disciplines, such as computer science, cognitive science and human-factors engineering. 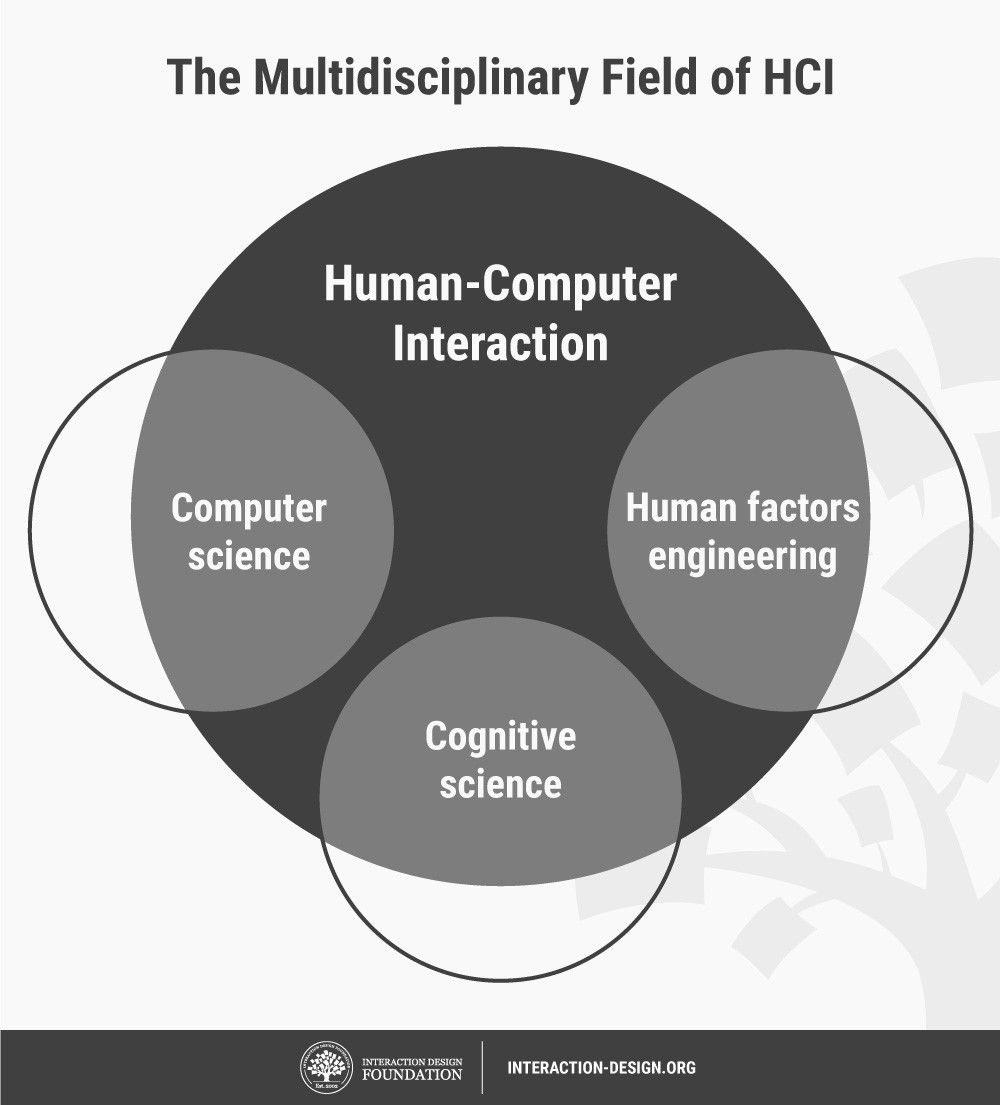 HCI soon became the subject of intense academic investigation. Those who studied and worked in HCI saw it as a crucial instrument to popularize the idea that the interaction between a computer and the user should resemble a human-to-human, open-ended dialogue. Initially, HCI researchers focused on improving the usability of desktop computers (i.e., practitioners concentrated on how easy computers are to learn and use). However, with the rise of technologies such as the Internet and the smartphone, computer use would increasingly move away from the desktop to embrace the mobile world. Also, HCI has steadily encompassed more fields:

“…it no longer makes sense to regard HCI as a specialty of computer science; HCI has grown to be broader, larger and much more diverse than computer science itself. HCI expanded from its initial focus on individual and generic user behavior to include social and organizational computing, accessibility for the elderly, the cognitively and physically impaired, and for all people, and for the widest possible spectrum of human experiences and activities. It expanded from desktop office applications to include games, learning and education, commerce, health and medical applications, emergency planning and response, and systems to support collaboration and community. It expanded from early graphical user interfaces to include myriad interaction techniques and devices, multi-modal interactions, tool support for model-based user interface specification, and a host of emerging ubiquitous, handheld and context-aware interactions.”

— John M. Carroll, author and a founder of the field of human-computer interaction.

The UX Value of HCI and Its Related Realms

HCI is a broad field which overlaps with areas such as user-centered design (UCD), user interface (UI) design and user experience (UX) design. In many ways, HCI was the forerunner to UX design. 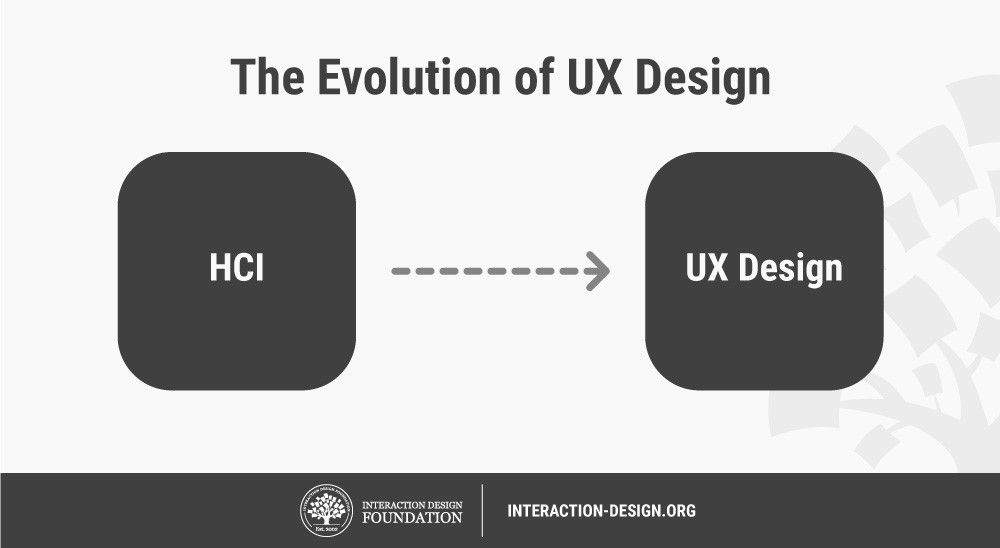 Despite that, some differences remain between HCI and UX design. Practitioners of HCI tend to be more academically focused. They're involved in scientific research and developing empirical understandings of users. Conversely, UX designers are almost invariably industry-focused and involved in building products or services—e.g., smartphone apps and websites. Regardless of this divide, the practical considerations for products that we as UX professionals concern ourselves with have direct links to the findings of HCI specialists about users’ mindsets. With the broader span of topics that HCI covers, UX designers have a wealth of resources to draw from, although much research remains suited to academic audiences. Those of us who are designers also lack the luxury of time which HCI specialists typically enjoy. So, we must stretch beyond our industry-dictated constraints to access these more academic findings. When you do that well, you can leverage key insights into achieving the best designs for your users. By “collaborating” in this way with the HCI world, designers can drive impactful changes in the market and society.

Keep up to date with the latest developments in HCI at the international society for HCI, SIGCHI: https://sigchi.org/

Learn the tools of HCI with our course on HCI, taught by Professor Alan Dix, author of one of the most well-known textbooks on HCI. You can find it here: https://www.interaction-design.org/courses/human-computer-interaction

Here’s the entire UX literature on Human-Computer Interaction (HCI) by the Interaction Design Foundation, collated in one place: 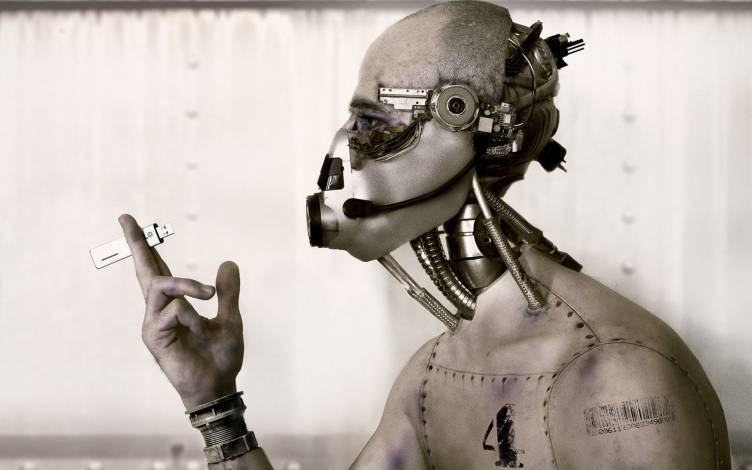 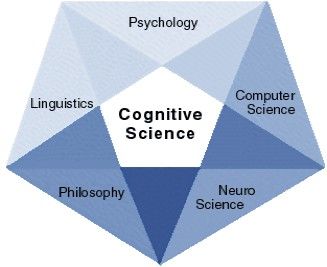 Interactions between products/designs/services on one side and humans on the other should be as intuitive as conversations between two humans—and yet many products and services fail to achieve this. So, what do you need to know so as to create an intuitive user experience? Human psychology? Human-centered design? Specialized design processes? The answer is, of course, all of the above, and this course will cover them all.

Human-Computer Interaction (HCI) will give you the skills to properly understand, and design, the relationship between the “humans”, on one side, and the “computers” (websites, apps, products, services, etc.), on the other side. With these skills, you will be able to build products that work more efficiently and therefore sell better. In fact, the Bureau of Labor Statistics predicts the IT and Design-related occupations will grow by 12% from 2014–2024, faster than the average for all occupations. This goes to show the immense demand in the market for professionals equipped with the right design skills.

Whether you are a newcomer to the subject of HCI or a professional, by the end of the course you will have learned how to implement user-centered design for the best possible results.

In the “Build Your Portfolio: Interaction Design Project”, you’ll find a series of practical exercises that will give you first-hand experience of the methods we’ll cover. If you want to complete these optional exercises, you’ll create a series of case studies for your portfolio which you can show your future employer or freelance customers.

Human Computer Interaction - brief intro
Human-computer interaction (HCI) is an area of research and practice that emerged in the early 1980s, initially as a spe Book chapter
Read book chapter

Personas
The persona method has developed from being a method for IT system development to being used in many other contexts, inc Book chapter
Read book chapter

Design iteration brings powerful results. So, do it again designer!

Design iteration brings powerful results. So, do it again designer!
The iterative design process is a simple concept. Once, through user research, you have identified a user need and have
Read

Usability Evaluation
Put simply, usability evaluation assesses the extent to which an interactive system is easy and pleasant to use. Things Book chapter
Read book chapter

Visual Representation
How can you design computer displays that are as meaningful as possible to human viewers? Answering this question requir Book chapter
Read book chapter

A Very Useful Work of Fiction – Mental Models in Design

A Very Useful Work of Fiction – Mental Models in Design
Mental models play an important role in Human-Computer Interaction (HCI) and interaction design. They relate to the way
Read

Visual Aesthetics
Visual aesthetics, as discussed in this chapter, refers to the beauty or the pleasing appearance of things. We discuss t Book chapter
Read book chapter

Activity Theory
Foreword: Why activity theory? This chapter is about a theory that was developed decades ago. Some of the basic ideas o Book chapter
Read book chapter

3D User Interfaces
Ever since the advent of the computer mouse and the graphical user interface (GUI) based on the Windows, Icons, Menus, a Book chapter
Read book chapter

Social Computing
As humans we are fundamentally social creatures. For most people an ordinary day is filled with social interaction. We c Book chapter
Read book chapter