The 'Rules of Play': Directing Gamer and User Behaviour

In Rules of Play: Game Design Fundamentals, Katie Salen and Eric Zimmerman (2003) provide a unified model of gaming, which attempts to encourage and foster innovation with new methods, strategies and concepts for understanding the fundamentals of gaming. According to Salen and Zimmerman, all games are the product of three levels or categories of rules, which are;

Constituative - These rules are "the abstract, core mathematical rules of a game". It is within this category of rules that the games internal logic exists. However, constituative rules by themselves do not show players how they must put them into practice.

Operational - These are the "rules of play" that guide the game and direct and determine the gamers' behaviour. Operational rules are typically the directions and constraints outlined within a manual or instruction booklet.

Implicit - These are the rules that are not expressly stated within an instruction book, but are appreciated by players internally and without the need for verbalisation before the game begins or during.

The Relationship Between these Categories

As is often the case when categorising and defining things, in practice these rules overlap and influence one another throughout the gaming experience to influence players' behaviour. For example, the operational rules are generally based on the constituative rules for any given game and latter can be expressed in a whole host of various operational forms.

Likewise, there is no such clear distinction between operational and implicit rules during many games, as some game designers may feel it necessary to explicitly state what the implicit rules are within the instruction booklet or manual (whether paper, e-versions, or within a computer game interface).

Salen and Zimmerman state that the unique and formal identity of all games are the product of the relationship between the constituative and operational rules. Distinguishing one game from another rests on the degree to which these two categories of rules define the gaming experience. Further to this, the meaning of a game lies in the relationship between and effect of the three categories of rules.

Salen and Zimmerman's Rules in Practice

In Interdisciplinary Interaction Design: A Visual Guide, James Pannafino provides the following gaming example to highlight the distinction between the three categories of rules: 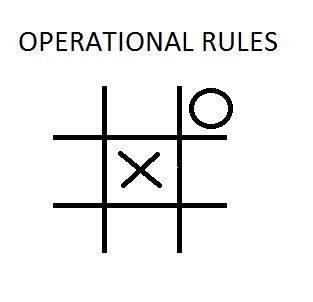 In the case of a game of noughts and crosses, or tic-tac-toe, the operational rules are the number of squares (i.e. 9) available to the players, which are arranged in three columns and three rows, and each player picks one specific marker (i.e. cross or nought). 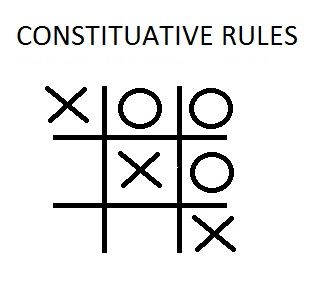 The constituative rules are based on maths, and in this example the players take it in turns to put their marker in the vacant squares until one of the players has three of their markers in a row (vertical, horizontal or diagonal). 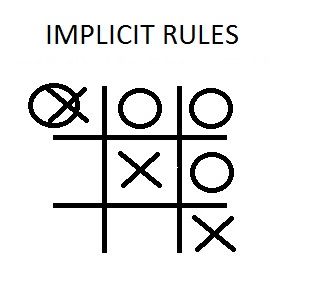 Players must not place their marker into an occupied square...this is cheating.

"Elegant rules allow players to focus on the experience of play rather than on the logic of the rules. Designing meaningful play involves building discernable and integrated relationships between action and outcome into all levels of the rules of a game." (Salen and Zimmerman)

Rules are effectively constraints. The constraints, whether inherent within a game/product/service/etc. or established by the designer, are guides for behaviour. Rules should not be punitive (unless that is part of the gaming or user experience); they should direct players and users to make their decisions. Rules can be employed in a myriad of ways, and designers should embrace them to help users and gamers make beneficial decisions.