We humans are competitive creatures, and creators of successful online games and sports applications use this knowledge to egg us on with leader boards. However, as a designer, you can apply leader boards in so many other situations to encourage users to engage more, or produce better output. Trust that no-one wants to finish last, however fun or ‘non-competitive’ your subject matter may seem, and implement this simple design pattern to boost user interaction with your designs. Do it well, and you’ll find yourself driving increased user traffic and your product becoming the centerpiece of an entire network of communities.

You have a highly competitive community where current standings would give users the incentive to try harder and use your product or service more frequently. Nearly everyone’s unknown to each other – so the achievements each user makes are known only at home. Without a frame of reference and especially for those who aren’t used to competing with themselves, how can they drive themselves to do better, let alone outstandingly?

The Twitter Counter webpage shows a leader board of all Twitter users, according to the number of followers. This is part of the free tools they provide, besides the paid tools to increase the social reach of individuals and companies. Although Justin Bieber might not be preoccupied with taking over first place from Katy Perry, leader boards generally have the ability to encourage increased use of a product or service.

A leader board, containing a list of rankings representing performance in a particular category or overall standings, helps to show users exactly how they are performing in relation to others. Having a visible score has the added benefit of allowing them to track their own progress, so even if they have dropped a level, they might have the consolation that at least they’ve improved on their own scores by a fair degree since the last check-in. The inclusion of a leader board can increase competitiveness between the users and drive up the frequency of use of your product/service. Examples from leader boards in user interface design include online gaming communities, online courses (such as the leader board in the IxDF courses’ “Meet Your Peers” section), Amazon's list of top reviewers, and Twitter Counter’s list of top tweeters, as seen in the image above.

Why Choose a Leader Board Design Pattern?

“If you’re a competitive person, you don’t stop. That stays with you. You always look over your shoulder.”
—Magic Johnson, American Basketball superstar

There’s a saying that goes, “I’m only in competition with myself.” That’s all well and good, and let’s be clear that we have no issue with that—striving for a personal best is indeed an essential driving force within people, one that can involve anything from mountain climbing to lowering blood pressure. Here, we’re focusing on competitive communities, hence relative rather than absolute performance – in those, leader boards can encourage users to continue using your product or service as they strive to improve their standing. Making clear to users how they are performing compared to other competitors is vital here. Imagine playing a game where you never see the other person's score: you would never know when to push yourself harder, or whether you are playing better than the other users. Therefore, leader boards provide a visible and concise way of displaying relative performance levels, which can motivate users to try harder and persevere with your product or service.

We use leader boards in the Interaction Design Foundation’s online courses, to encourage course participants to compare themselves to their national and global group of peers.

To help you get started implementing leader boards, you can download and print our “Leader Boards” template:

Get your free template for “Leader Boards” 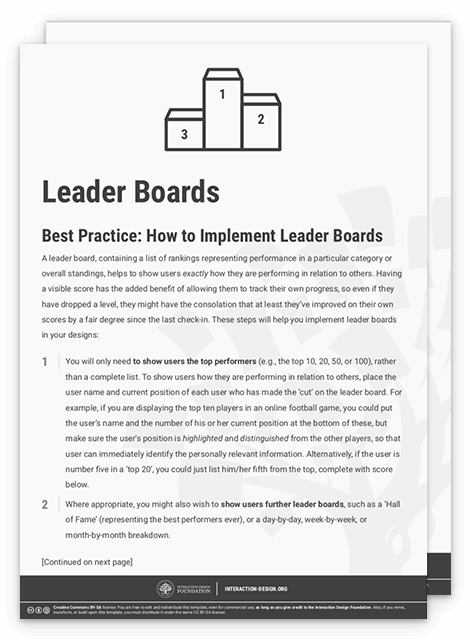 For sure, leader boards can be a useful addition in competitive online communities, but users might find ways around investing time and effort to reach the top, using sneaky measures and devaluing the meaningfulness of the leader board. For example, cheats to online games are described in blogposts, and users leave reviews on e-commerce sites to jump up the leader board without necessarily using the products they are reviewing. Distortion is another sticky area. Some fitness trackers, for example, can be fooled due to jerky hand movements that get counted as steps. So, regardless of the point that it still takes energy to wiggle his hand a few hundred times, a user may fool the system into believing he’s walked a fair fraction of a marathon when, in reality, he’s been wiping down every surface in the house, throwing a tennis ball from hand to hand, or any number of other activities that cause a step count to rise without actually stepping. Leader boards can also lead to disappointed users when they merely represent a scale of the amount of time users have invested playing a game or using a service, rather than a true measure of the different users' performance levels.

Leader boards can be inappropriate to use in certain cases when encouraging a competitive atmosphere can harm a small group of users. For example, you should reconsider using a leader board that ranks people based on their number of Facebook friends. Such numbers can all too easily become hollow boasts, as they don’t reflect the true substance of what they appear to be (e.g., gaining 128,000 true ‘friends’ at the dictionary-definition level of ‘friend’ tends to be a little unlikely in, say, fewer than a hundred or so lifetimes). At the same time, having a leader board is acceptable when doing the same based on Twitter followers. There is a fine line between ranking people based on what they do and who they are. In the first example, people at the bottom of the list ‘lose’ due to something they can’t be expected to control in full. In fact, the more earnest users will certainly get bumped down the list by those who have no regard for the division between ‘friend’, ‘acquaintance’, ‘hanger-on’, and ‘reciprocator’ (a person who mutually ‘friends’ someone in order to raise the numbers of both’s ‘friends’). Other areas to consider include numbers of likes on social media. While perhaps not as divisive as ‘friends’, they can still carry a potential ethical dimension vis-à-vis including a leader board for them – people can hire shills, meaning they can buy likes from others, and distort the actual worth of what is being liked. You have a responsibility as a designer to consider all perspectives of a design decision and not make your users feel like losers.

With the leader boards design pattern, you have the ability to motivate users to step it up. Most people possess at least a little competitiveness, which you can exploit by displaying how they are doing compared to others. You don’t need to show a full list of all participants to get this result, but your users may be interested in different types of leader boards. Trusting that your users will not cheat, and staying mindful of realms of human life where competition is counterproductive, unethical, or both, it’s a wonderfully effective design pattern to persuade them to be active and contribute on your platform, potentially creating a win-win situation for all concerned.

Join 309,953 designers who get useful UX tips from our newsletter.

Bad Design vs. Good Design: 5 Examples We can Learn From
Looking at examples of bad design alongside counter-examples of good design is not only fun but also draws important les
Read

KISS (Keep it Simple, Stupid) - A Design Principle
It was Albert Einstein who said; “If you can’t explain it, you don’t understand it well enough.” Though it is often mis-
Read

Usability: A part of the User Experience
This subject may seem incredibly “big” for a single article, but it’s about the specific nature of usability that we oft
Read

An Introduction to Usability

An Introduction to Usability
Usability and user experience (UX) are not the same thing: the usability of a product is a crucial part that shapes its
Read

Usability vs Desirability in Mobile UX

Usability vs Desirability in Mobile UX
The question of what usability is compared to desirability comes up a lot in UX design, and it’s important to be able to
Read

Design Scenarios - Communicating the Small Steps in the User Experience