Type is everywhere. In the books you read, the products you use, and even in this very website you're on right now. But what is type? In the context of design, type is the style or appearance of text. It can also refer to the process of working with text. Typography can often be an intimidating topic, but it doesn’t have to be. You only need to understand the basics to make an impact in your designs.

So, let’s begin. Designer and educator Mia Cinelli will discuss type classifications, type families, and help us understand the difference between a font and a typeface.

What Are Type Classifications?

According to Ellen Lupton, author of “Thinking with Type,” type classifications are a basic system for classifying typefaces devised in the nineteenth century, when printers sought to identify a heritage for their own craft analogous to that of art history. Humanist letterforms are closely connected to calligraphy and the movement of the hand. Transitional and modern typefaces are more abstract and less organic. These three main groups correspond roughly to the Renaissance, Baroque and Enlightenment periods in art and literature.

Historians and critics of typography have since proposed more finely grained schemes that attempt to better capture the diversity of letterforms. Designers in the twentieth- and twenty-first centuries have continued to create new typefaces based on historic characteristics. Let’s take a look at the common classifications for Serif, Sans Serif, Monospace, Script and Display typefaces.

A serif is a stroke added to the beginning or end of one of the main strokes of a letter. A typeface with serifs is called a serif typeface. Serifs can be classified as Old-Style, Transitional, Modern and Slab.

A typeface without serifs is called a sans serif typeface, from the French word “sans” that means "without." Sans serifs can be classified as Transitional, Humanist and Geometric.

A typeface that displays all characters with the same width is known as Monospace.

Script typefaces have a natural, handwritten feel. Scripts can be classified as Black Letter, Calligraphic and Handwriting.

Display typefaces, also known as decorative, are a broad category of typefaces that do not fit into the preceding classifications. They are typically suited for large point sizes and primarily used for display.

Example in Use: Helvetica

Get your free template for “Type Classifications” 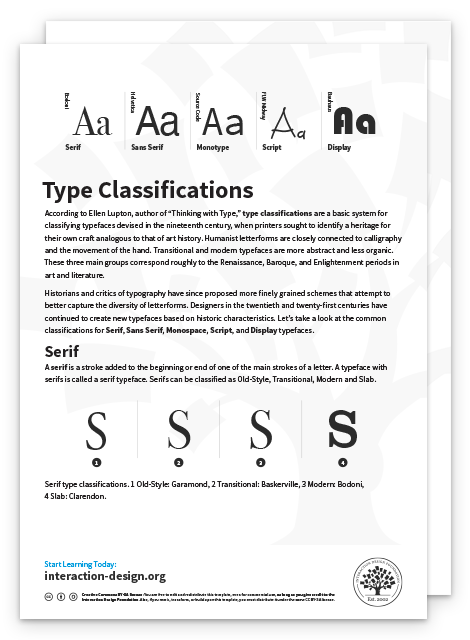 What are Type Families?

In the sixteenth century, printers began organizing roman and italic typefaces into matched families. The concept was formalized in the early twentieth century to include styles such as bold, semibold and small caps.

Example in Use: Garamond 3

This magazine cover uses the Garamond 3 typeface family in various sizes. Although the typeface is classical and conservative, the obsessive, slightly deranged layout is distinctly contemporary.

What are Type Superfamilies?

A traditional roman book face typically has a small family — an intimate group that consists of roman, italic, small caps, and possibly bold and semibold (each with an italic variant) styles. Sans-serif families often come in many more weights and sizes, such as thin, light, black, compressed and condensed. A superfamily consists of dozens of related fonts in multiple weights and/or widths, often with both sans-serif and serif versions. Small capitals and non-lining numerals (once found only in serif fonts) are included in the sans-serif versions of Thesis, Scala Pro and many other contemporary superfamilies.

Example in Use: Univers

Univers was designed by the Swiss typographer Adrian Frutiger in 1957. He designed twenty-one versions of Univers, in five weights and five widths. Whereas some type families grow over time, Univers was conceived as a total system from its inception.

Type is everywhere. In the books you read, the products you use, and even in this very website you're on right now. In the context of design, type is the style or appearance of text. In this lesson, you learned about type classifications, type families and the difference between a font and a typeface.

Type classifications were a basic system for classifying typefaces devised in the nineteenth century, in an effort to organize and understand type. Common classifications include Serif, Sans Serif, Monospace, Script and Display typefaces.

You also learned about type families, a concept formalized in the early twentieth century to include styles such as roman, italic, small caps and bold — and type superfamilies, that consisted of dozens of related fonts in multiple weights and sizes to include thin, light, black, compressed and condensed.

Remember, you only need to understand the basics to type to make an impact in your designs.

Learn more about the Typography by reading this thoughtful book by Ellen Lupton: Ellen Lupton. Thinking with Type. 2010. (Link)

Join 310,079 designers who get useful UX tips from our newsletter.

Physiological Needs: Maslow's Hierarchy of Needs
At the base of Maslow's hierarchy of human needs we find the physiological level, which encompasses the basic, yet self-
Read

Consistency: MORE than what you think

Consistency: MORE than what you think
Let’s examine a subject that has more to it than meets the eye. Applying a deeper appreciation of consistency to your de
Read

Vision and Visual Perception Challenges
It sounds so simple; take some light and turn it into an understanding of the world around you – we all do it every day;
Read

How to Create Visuals for Your UX Case Study
As designers, one of the first things we think of when we create our UX case study is what visuals we can add to spice t
Read

What Is Type Anatomy?

What Is Type Anatomy?
Typography has its very own language. It’s full of typographic terms that make up its basic anatomy. Just like it’s vita
Read