Learn How to Use the Worst Possible Idea Method

We all know what it is like when someone calls for new ideas. At first, no one wants to say anything; most people tend to wait to hear what others have to say, and—if they feel that their ideas are not as great—they may bottle up what they're thinking. Worst Possible Idea is a highly effective method that you can use to get the creative juices flowing and help those not so confident in expressing themselves by flipping the brainstorm on its head. And it’s a lot of fun, too.

Instead of going for good ideas and putting the pressure on, call for the worst and, yes, the worst possible ideas your team can come up with. Doing this relieves the anxiety and self-confidence issues and allows people to be more playful and adventurous, as they know their ideas are most certainly not going to be scrutinized for missing the mark. It's way easier to say “Hey no that's not bad enough.” than the opposite. Better still, it helps ensure that mental constipation is never responsible for keeping a breakthrough idea from getting out into the open.

In Idea Stormers, the author and innovation guru to Fortune 500 companies, Bryan Mattimore, recalls a scenario where he was trying to get a group of bankers to come up with innovative ideas. They had gone through hours of ideation sessions and had come up with nothing worth considering. Mattimore introduced the Worst Possible Idea method as a last resort. As soon as the first of the bankers had thrown out a terrible suggestion, the rest of the group quickly joined in and finally had some fun as well, opening up the way for positive ideation sessions later.

The Worst Possible Idea or Worst Idea technique is not purely an icebreaker-style technique, though, as insights that may stem from really bad ideas may even be useful in generating really great ideas. On that note, it doubles as a—really fun—process of elimination.

“To invent, you need a good imagination and a pile of junk.”

The technique is simple:

A closed mind will not be able to build on external stimuli. We've all witnessed this in some way or another—a person who is convinced that their own ideas are better than anyone else's becomes oblivious to the value of the contributions others have made. Group ideation functions best when all ideas can be expressed equally and then later mixed up in unconventional ways. This approach by the Worst Possible Idea produces novel combinations or completely new ideas. With ideas, one leads to another; bad ideas lead to good ones, sometimes in ways we could never have imagined. At times, the best idea stems from its exact opposite—the worst. This is why the Worst Possible Idea is actually an ideation method, one which you can use to provide disruptive insight within the ideation process.

This is a lateral thinking technique which seeks to solve problems through an indirect and creative approach. It’s all about using reasoning that is not immediately obvious and involving ideas that may not be obtainable by using only traditional step-by-step logic. The purpose of lateral thinking is to help us break out of rigid thought patterns and to generate unpredictable and innovative ideas. Lateral thinking seeks to arrive at unknown solutions, as opposed to vertical thinking, which operates directly on perceivable data and analysis. Not for nothing are the horizons—and, by association, the possibilities—broader with lateral thinking.

Get your free template for “Worst Possible Idea” 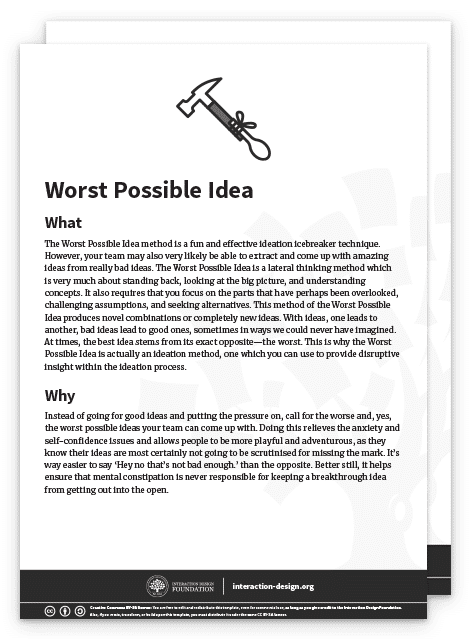 The Worst Possible Idea method is a fun and effective ideation icebreaker technique. However, your team may also very likely be able to extract and come up with amazing ideas from really bad ideas. The Worst Possible Idea is a lateral thinking method which is very much about standing back, looking at the big picture and understanding concepts. It also requires that you focus on the parts that have perhaps been overlooked, challenging assumptions and seeking alternatives. It’s a great way of zeroing in on what will work by exposing what won’t, but then working out or working back elements from these “dud ideas” that may have a bearing on the true solution to the problem at hand.

Edward de Bono, New think: The use of lateral thinking in the generation of new ideas, 1967

Maria Giudice and Christopher Ireland, Rise of the DEO - Leadership by Design.

Join 309,747 designers who get useful UX tips from our newsletter.