Deadly Designs and What to Do About Corporate Bullies?

This week’s news includes the horrific story about General Motors’ treatment of a supplier. The supplier in question, Delphi, designed an ignition switch for GM’s cars. It transpires that for nearly 10 years GM has known that the switch has a serious fault and that instead of withdrawing that switch has bullied Delphi into continuing to make that switch.

The consequences here are not minor, they are catastrophic, the faulty switch is said to have led to over 30 deaths and many more personal injuries.

Delphi, to its credit, is shown to have made General Motors aware of the problem when it was found. It has also been demonstrated that Delphi wanted to withdraw the part because of their concerns. GM is one of Delphi’s largest clients and it decided that it did not want to change switches without changing Delphi as one of its suppliers. In fact, so passionate was GM’s management team about this, that they required Delphi to keep making faulty products or lose their business.

Delphi caved. Commerce won out over morality. The result is clear cut; people died due to this deadly design. 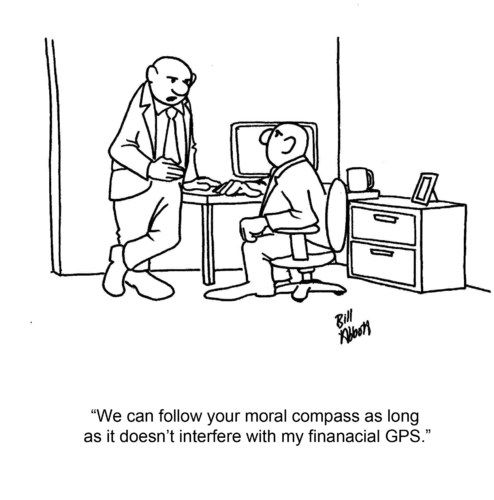 What Should Have Happened?

What if you were in the position of Delphi? What if you were working on a project for your biggest client and then you realized the designs that you had supplied, whilst they were going to be popular, might kill another person? What if you raised your concerns to your customer and they said; “we don’t care, insurance will take care of that, just keep on going”?

It is very easy to say, when we’re not in that position that we would just walk away from the business. History shows that this is unlikely. This is not the first time that a major auto-manufacturer has been caught playing this kind of game (Ford was caught pulling a similar trick with the Ford Pinto’s fuel tanks).

The Guardian newspaper also has some pretty depressing evidence this week that those who blow the whistle in the corporate world are not thanked for their efforts after the fact either. In fact, they are likely to end up ostracized and with severe psychological issues to cope with.

So the question remains; how do you deal with this? Is your career or your company worth a single human life? In many cases it appears that the answer to this question is “yes” and that’s deeply worrying.

It is possible to stand up to bullies. It is possible to say; “no thanks, we’ll find other clients” but it’s hard to say. It’s particularly hard after you’ve invested all that time and effort into winning the client and designing the product. We would encourage you to take the hard path if you find yourself in this situation.

We would also encourage governments of this world to provide better protection for those who need to say no. Whistleblowers and those who refuse to endanger their users’ health and safety need protection from reprisals. Real protection not just nice words. This will take time to achieve but for the sake of more than the user experience; work needs to start on this now.

Join 293,473 designers who get useful UX tips from our newsletter.