Affordances are an object’s properties that show the possible actions users can take with it, thereby suggesting how they may interact with that object. For instance, a button can look as if it needs to be turned or pushed. The characteristics of the button which make it look “turnable” or “pushable” together form its affordances.

Psychologist James Gibson coined “affordance” in 1977, referring to all action possibilities depending on users’ physical capabilities. So, a chair not only “affords” being “sat on,” but also “thrown,” “stood on,” etc. However, in human-computer interaction (HCI) expert Don Norman’s 1988 book, The Design of Everyday Things, affordances became defined as perceivable action possibilities—i.e., only actions users consider possible. Thus, an object’s affordances depend on users’ physical capabilities and their goals and past experiences. A chair only affords “sitting,” because past experience supports that action. Don Norman’s definition of affordances as perceivable action possibilities soon became the predominant one in HCI and UX design.

Designing products with affordances in mind is vital for clearly showing what users can do with them. However, designing effective affordances is getting increasingly harder—how we use/control objects has changed. The first objects (e.g., hammers) people grabbed physically—tools giving direct control. Later, performance-enhancing mechanisms (e.g., catapults) appeared between objects and users, providing mechanical control. With electricity, people were suddenly interacting with motors instead – mechanical succumbed to electrical control. Once printed circuit boards became cheaper and sophisticated products featured even more functionality, understanding a product’s functions from its appearance grew even harder.

We have since become used to controlling complex operations with smartphones—our fingers touch glass displays that don’t offer obvious affordances. To leverage this development, UX designers often utilize the knowledge/experience people have of their past interactions with direct or mechanical control so as to design electronic products’ affordances. For instance, buttons on software interfaces often resemble physical buttons with elevation (featuring drop shadows). 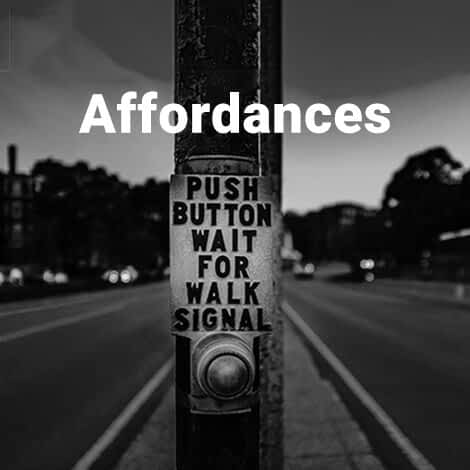 Here’s the entire UX literature on Affordances by the Interaction Design Foundation, collated in one place:

The concept of an affordance was coined by the perceptual psychologist James J. Gibson in his seminal book The Ecological Approach to Visual Perception. The concept was introduced to the HCI community by Donald Norman in his book The Psychology of Everyday Things from 1988. There has however been ambiguity in Norman's use of the concept, and the...

44.1 Abstract The concept of affordances originates from ecological psychology; it was proposed by James Gibson (1977, 1979) to denote action possibilities provided to the actor by the environment. In the late 1980s Norman (1988) suggested that affordances be taken advantage of in design. The suggestion strongly resonated with designers’ conce...