Prototyping is an indispensable part of the design thinking process. However, it’s crucial to know how to prototype the right way and avoid some common pitfalls. If not, your prototyping efforts might be for nothing as your biases and inefficiencies will lead to a suboptimal design solution. Let’s look at six common pitfalls and misconceptions of prototyping that can undermine your prototyping process, as well as how to combat each of them and build better products.

Prototyping is incredibly important. When you create prototypes to test them with users or to discuss your design ideas, you can gain important feedback that lets you improve your ideas. However, there are also many misconceptions about how to prototype that might cause you to go down the wrong path. That’s why we’ve listed below six common misconceptions and pitfalls, as well as solutions to each to help you reframe your mindset. Let’s get started!

It’s tempting to grab at the first glimmer of light you see and run with that as your final solution. Perhaps you’ve come up with a great idea and can’t see why it might fail.

However, diving into the first good idea is not a good idea, because most problems we want to solve are more complex than they look on the surface. If you latch onto a promising idea and push it all the way into a fully formed solution, you might find out too late that you’ve gotten a couple of assumptions wrong (if you are lucky). The way people behave, constraints in the environment and a thousand other factors might cause matters to turn out differently from your or your team’s expectations.

Prototyping, especially the higher-fidelity version, can be expensive and time-consuming. If you commit to prototyping the first option, you may spend all your time trying to make a suboptimal idea work rather than finding a better or simpler idea.

Start with a diverse range of ideas. Go through a divergent ideation process, where you come up with as many ideas as possible, even when you think you’ve got a “best” idea. Use low-fidelity prototypes to help you—for instance, sketch out your ideas as you brainstorm, and share them with your team-mates to create even more ideas.

One of the keys to successful prototyping is to work through a number of models and explore different approaches. That way, you can include the best characteristics and remove problematic ones for the final solution.

Test out many ideas. Test them by building prototypes—no matter how rough and simple—and test them on team-mates, internal stakeholders and users. Test many alternatives even within one idea. Most times, you will be inspired to create more ideas or merge a few solutions into a better and more successful one.

2nd Pitfall: Falling in Love with Your Prototypes

The endowment effect,otherwise referred to as “investment bias”, can interfere significantly with your prototyping process. The endowment effect happens when people ascribe more value to an object simply because they have ownership over it.

In prototypes, the endowment effect can create the dangerous situation wherein prototypes become too precious to fail or give up on.

The danger of falling in love with your prototypes is that you can get overly invested in the success of your prototypes, and thus overlook faults and negative user feedback. If you insist on implementing a prototype because of the amount of time and effort you’ve put into it, you can end up with something you love that doesn’t help solve your users’ needs.

Start simple. Make quick and fast prototypes. Make use of low-cost, readily available materials in early-stage, low-fidelity prototypes. Always make sure that your prototype has just the level of detail required for what you are testing for, never too much. For example, use sketches and paper prototypes in the early parts of your design process. This prevents you or your team-mates from becoming too attached to a prototype. If you spend too much time early in the design process to create high-fidelity prototypes that look great, you might dupe yourself into thinking that you’ve landed on a miraculous discovery, a winner that will definitely resonate with users.

Also, be prepared to break, completely destroy or throw those models away once the questions they pose are answered. You can achieve this mentality by using low-cost materials in your prototypes. Test out a number of ideas and models as rapidly as possible in order to avoid becoming anchored to one stream of thought.

Design thinking has a bias towards action. This means it’s always better to show rather than tell—avoid spending too much time pitching and explaining ideas rather than making things. This results in a theoretical focus and could lead you to move forward with ideas that you have not tested. As much as possible, create prototypes to explain your ideas. If you are unable to show how your idea works, you may find there are holes in the idea—and that’s a learning opportunity right there!

Solution: Have a Bias Towards Action

Embrace a bias towards action by opting to show the value of the ideas instead of telling everyone how great they are. When you build simple prototypes to show what your ideas are, you also make them much easier to understand and allow others to build on them.

For instance, when IDEO was approached by Gyrus ACMI, a medical visualization and energy systems company, the team met with specialist surgeons to understand their needs better. After one of the surgeons explained (or tried to explain) how their surgical instrument could be improved, an IDEO designer immediately created a rough prototype of the idea. The team was able to understand instantly what the surgeon meant, and they brought the discussion forward and saved the team many more meetings. Prototype to show, because showing is much more productive than telling.

4th Pitfall: Prototyping Without a Purpose

Why are you prototyping? Always make sure you can answer this question before you begin to prototype. You should create a prototype to answer specific questions, test and validate assumptions, illustrate an idea, flesh out an idea and so on. If you prototype for the sake of prototyping, you’ll lack a focus. You’ll likely create a prototype with too much detail, which is a waste of resources, or too little detail, which makes it ineffective in tests.

Solution: Have a Question in Mind

Before you create a prototype, ask yourself, “Why am I creating this prototype?” Make sure you have a central purpose (i.e., to test your assumption X, or to test the usability of your solution, etc.), and then build your prototype to match that purpose. For instance, if you need to test your assumption that users will not be willing to use a piece of equipment heavier than 2 kilograms, then you don’t even need to create a functional prototype. Simply create a prototype that weighs under 2 kg, and another that weighs over 2 kg, and test both on users. You’ll save time and still be able to learn exactly what you want to learn.

“Failure” and prototyping go hand in hand. After all, you are likely to discover mistakes when you test your prototypes. The danger here is that you might feel disillusioned and unmotivated to move forward in your design process.

Solution: Reframe the Idea of Failure

Reframe the idea of failure in prototyping into a learning mentality. Remind yourself that wrong ideas and failed prototypes allow you to learn more than successful tests and prototypes do. Embrace the principles of lean methodology by working validation into every decision that you make or have a hand in making. Validation reframes the concept of failure and makes it part of the process of learning instead of being a destructive influence. When you think of prototypes as learning opportunities, you set yourself up for a kind of positive failure that leads to a new, more informed experiment.

6th Pitfall: Seeing Prototypes as a Waste of Time

If you constantly need to build prototypes for every idea and assumption that you have, wouldn’t you be wasting time? Many times, designers and teams who are not used to design thinking feel that prototyping is a waste of time and resources. “Wouldn’t building prototypes slow us down?” they ask. “Wouldn’t we be better off to stay focused on the drawing board before we get around to putting things together in the real world?”

The truth is the opposite. Although we might spend time when we build prototypes, they actually allow us to move faster in the long term. It’s because, through prototyping, we are able to see whether our ideas would work out, and refine or abandon them. In the long term, we will be able to reach the ideal solution faster.

Build prototypes with a long-term view in mind. When you make prototypes, remember that the small amount of time you spend now will help you save days and even weeks of hard work—or needless toil, more like—in the future. Communicate to internal stakeholders who are concerned about the time “wasted” on prototypes, so the whole team (and ideally, the whole company) is on the same page. It may seem counter-intuitive, but spending time on prototypes will save you time.

Download Our Template of the 6 Common Pitfalls in Prototyping

We’ve created a template that contains all six of the common pitfalls we described above, as well as ways you can solve them: 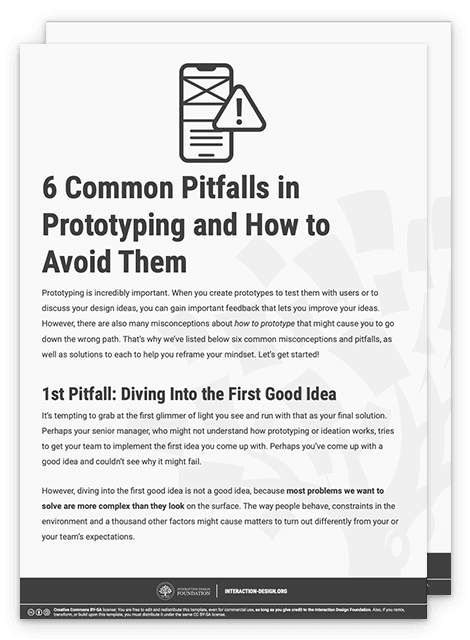 Prototyping is crucial in every design thinking project. However, there are pitfalls that could undermine your efforts to let prototypes work for your team. Specifically, you should avoid six of these common pitfalls. Learn to embrace the idea of constantly and rapidly prototyping, and make sure you have the right mindset when making prototypes. The old saying goes that nothing is more powerful than an idea whose time has come. That may seem all very well, but a series of prototypes will bring such an idea into the real world where people can make it truly powerful.

Join 309,998 designers who get useful UX tips from our newsletter.