Build a common language by referring to design movements

Let’s check out a couple of words that are vital to us. Without them or their functions, life would be a nightmare. It would take ages to get anything done! Thankfully, we have categorization and labeling to help us understand our world and communicate with others.

Labels and categories are great, time-saving building blocks. As user experience designers we can leverage them to communicate more efficiently and purposely. In this article, we will have a look at some design movements and how we can use them. We also hope it serves you to freshen-up your knowledge on design history! 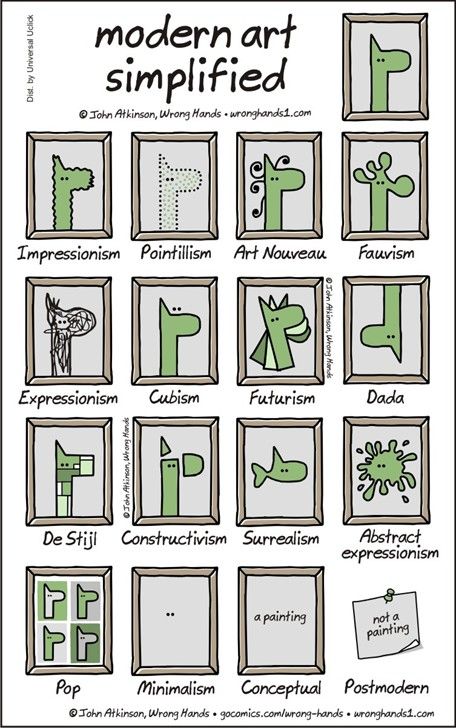 We recently came across this smart infographic by cartoonist John Atkinson, from Wrong Hands (http://wronghands1.com/). He has managed to make it so visual and easy to compare different modern art styles. Thanks!

Remember those labels and categories? Can you see how neatly we can apply labels to the different art movements? In the space of seconds – if even that long! – many people can say that a painting comes from a certain movement. Those with some expertise can go further and fine tune that by recognizing the artist within the movement. Well, that’s great because it shows the point here. Someone, like you, can look at an object or design and, without getting into the game of twenty questions, where you ask yourself about the item’s qualities, you can categorize it mentally, in a moment. When talking to other designers, you can talk using a label for an artistic movement (e.g., surrealism) and the other person can recognize it instantly.

As a user experience designer, you might feel that art is far removed from your everyday practice. We’re designers, not artists! For sure, our motivations and skills are different, but this doesn’t mean that we can’t learn from art styles and use them as a reference. Before you keep reading, just take a few seconds to think of ways in which art can be useful for your work.

You could, for example, use the image above to frame a design conversation with your client, manager or colleagues. It won’t be long before all the “isms” become general knowledge to them. Images tell a thousand words, and it’s a nice, light piece – a fun way to help you talk about design.

Or, you could use any of these movements to explain the rationale of your design decisions. Refer to how any of them have influenced you or use an analogy, saying how your decision resembles elements or the spirit of a movement, or a shift between movements.

Or, in a co-creation session, you could take the various movements of art and use specimens of each for the participants to work on their creations.

What about design movements labels?

Look closely at the six characters in the picture. What imagery do they conjure for you? 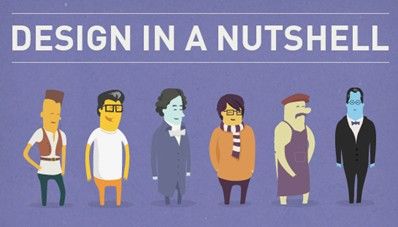 Yes, they are labels in themselves! Their appearances (dress, posture, etc.) reflect the categories they are portraying. Without giving away the answers, we might suggest that it would have been hard to find a punk rocker in the time when Beethoven was composing. That’s not meant to sound patronizing; it’s just to show how simply and effectively we can take something as large and abstract as a movement, find a place for it (categorizing it), and then think about or discuss it (labeling it).

Labels are great because they help us have a readily accessible image of what designs truly are and where they belong in relation to other categories of designs.

Before reading about each of the design movements pictured by these 6 characters, we invite you to test your current knowledge by matching the figures above with each of the movements!

Design in a Nutshell

The Modern Art Simplified poster by John Atkinson also reminded us of a resource we had bookmarked some time ago: “Design in a Nutshell” by Clive Hilton of the UK’s Open University. In six short videos, he summarizes the lowdown of six key design movements. Through them, you can learn about:

Gothic Revival: this was one of the most influential styles of the 19th century. This movement based its designs on forms and patterns used in the Middle Ages. It was “caused” by the Industrial Revolution. Not everyone was happy with the way things were going back then; many sought solace in medieval designs as a refuge from the powerful effects of mechanization. Retaliating against the perceived intrusion of the industrialized world, this movement reached far into the past, particularly taking comfort in ancient architecture. In England, many ornate, Gothic-looking churches and stately homes appeared at this time. Imagine living in a house like this!

Arts and Crafts: this movement stood for traditional craftsmanship using simple forms. It often used medieval, romantic or folk styles of decoration and was all about getting back to craftsmanship in a world saturated with mechanization and technology. A direct reaction to the effects of mass production, it flourished in Europe and North America between 1863 and 1910. It’s important to note that it wasn’t a rebellion against machines; it was a desire to bring the then-fading spirit of craftsmanship back to life and master the machines. Products started looking more carefully and lovingly made, allowing people to value them better.

Bauhaus: this movement started at an art school in Germany that combined crafts and the fine arts and operated from 1919 to 1933. It was revolutionary in that it harnessed many design disciplines, such as pottery, and married art and craft with new technology. It was about minimalism and booting out unneeded decoration while thinking about the world from outside the box. Unfortunately, thinking outside the box could get you into terrible trouble in 1933 in Germany.

Modernism: this movement arose in the late 19th and early 20th centuries. It called for up-to-date activities and creations to match the new economic, social, and political environment of an emerging, fully industrialized world. Its central tenet was that the function of an item should always determine its form. So, if you’d lived back then and had to design a pier, you’d likely have focused more on designing the pier for its purpose than considering the pretty features you’d want.

American Industrial Design: this movement resulted from the mass production that flourished after the Great Depression. It encouraged people to buy consumer goods by making these newly manufactured products appealing in design. Looks guided functionality - people could make statements about their lifestyles and personalities through the commodities they bought, ranging from toasters and lamps to sofas and cars.

Postmodernism: is a late-20th-century movement that was a departure from modernism. In March 1972, it popped up and challenged the old “less is more” credo of modernism. Unimpressed with what modernism saw as exciting, postmodernism gets people asking questions. To the dismay of its critics, it revives historical elements and techniques, such as ornateness. Fuelled by mass media and an increasingly inter-connected world, postmodernism is our age. It can still amuse, entertain and shock us; it keeps us pushing at the edges of what we see, asking about the nature of things. You could say that people have never before been able to be so creative or self-expressive thanks to their era!

Design history might seem irrelevant to your work as a user experience designer. Remember this, though: the knowledge of design movements can help you in many ways.

First, we see how cleanly the labels we can apply to the different categories of artistic and design movements slot into place. That’s a great gift! We don’t have to waste precious time trying to explain all the features and qualities of a movement before the other person understands what we’re talking about. Because the categories are already there (and have been there for many years!), we can take a beautiful shortcut and refer to them using labels that many of us will know.

Second, these different art and design styles can be a source of inspiration! We spend lots of time browsing the web. The next time you’re online, why not look out for the designers and artifacts these movements have generated as guides for your designs? They’re not hard to find, and you may be surprised at how many items you can see around you that owe their existence to at least one or two of these. Unless you live in a fully authentic Renaissance house and have no possessions made after 1800, you’re bound to find an interesting variety!

So, now you can use art and design movements to build a common language and understanding with your team and stakeholders. The same goes when working with users; you can use these movements to know what they stand for. Just make sure, beforehand, that the audience of your product won’t feel patronized by these references.

These design categories are chunks of living history that are exceedingly relevant to us as designers. Are you still not convinced? Then, just for fun, check out Clive Hilton’s work to find out your design alter-ego. You just need to answer six multiple-choice questions. I took this mini-test and found out “who” my alter-ego was … Ludwig Georg Van Der Pound! I’m more than comfortable with the match!

Where to learn more

Join 309,461 designers who get useful UX tips from our newsletter.