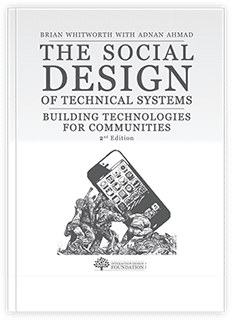 Hundreds of millions of people use social technologies like Wikipedia, Facebook and YouTube every day, but what makes them work? And what is the next step? The Social Design of Technical Systems explores the path from computing revolution to social evolution. Based on the assumption that it is essential to consider social as well as technological requirements, as we move to create the systems of the future, this book explores the ways in which technology fits, or fails to fit, into the social reality of the modern world. Important performance criteria for social systems, such as fairness, synergy, transparency, order and freedom, are clearly explained for the first time from within a comprehensive systems framework, making this book invaluable for anyone interested in socio-technical systems, especially those planning to build social software. This book reveals the social dilemmas that destroy communities, exposes the myth that computers are smart, analyses social errors like the credit meltdown, proposes online rights standards and suggests community-based business models. If you believe that our future depends on merging social virtue and technology power, you should read this book.

Adnan Ahmad
Adnan Ahmad was born in Lahore, Pakistan. He received his Bachelor of Science (Hons.) from Govt. College University (GCU, 2005), with a major in software engineering, and a Masters of Science from Lahore University of Management Sciences (LUMS, 2009), with a major in distributed systems. He worked for five years in industry, getting hands on experience with cutting edge software and hardware technologies. His PhD in Information Technology at Massey University, New Zealand, was on a formal model of distributed rights allocation in online social interaction. He has published in well-known conferences like Worldcomp, IFIP SEC, IAS, IAIT and Trustcom. His current research applies socio-technical design principles to computer security, and his other interests include crowd sourcing, distributed systems, spam and image processing.
Brian Whitworth
Born in England and brought up in New Zealand, Brian Whitworth currently works at Massey University in Auckland, New Zealand. After doing a mathematics degree, and a Master's thesis on split-brain neuropsychology, Brian joined the New Zealand Army, where he was the first specialist to complete regular army officer cadet training. He worked as an army psychologist, and then in computer operational simulations (wargames), while simultaneously raising four wonderful children, until he retired in 1989 as a Major. Brian then completed his doctorate on online groups, and students at his university used the social voting system he built until the World Wide Web arrived. In 1999, he worked in the USA as a professor, and published in journals like Small Group Research, Group Decision and Negotiation, Communications of the AIS, IEEE Computer, Behavior and Information Technology, and Communications of the ACM. More recently, he was the senior editor of the Handbook of Research on Socio-Technical Design and Social Networking Systems, written by over a hundred leading experts worldwide. His interests include computing, psychology, quantum theory and motor-cycle riding.