How to Represent Linear Data Visually for Information Visualization

Representing data sets of these types is a very common task for the information visualization designer. Choosing the right form of visualization will depend on the requirements of the user of the visualization as much as the data set itself.

Univariate data sets are very simple to represent visually. There are many different forms for showing univariate data and one of the most common is tabulating the data itself. For example you might want to show the relationship between types of car and their top speed.

Note: According to Automoblog.net these were the 10 fastest cars in the world in 2007.

Stephen Few, the information visualization consultant said; “Numbers have an important story to tell. They rely on you to give them a clear and convincing voice.” There is nothing intrinsically wrong with presenting this data in a tabulated format. It may be exactly what the user needs. Certainly, you can fairly quickly determine which car is the fastest (the Hennessey Venom GT) from the table – even if it’s not immediately obvious which is the fastest at first glance.

However, it might be better to represent the data graphically which would enable an easier comparison between all the cars.

There are many different graphical representations that can be used to show univariate data. They include pie charts, histograms, scatter plots, bar graphs, etc. The precise nature of the representation chosen will depend on the data set.

For example here’s the speed data shown as a pie chart: 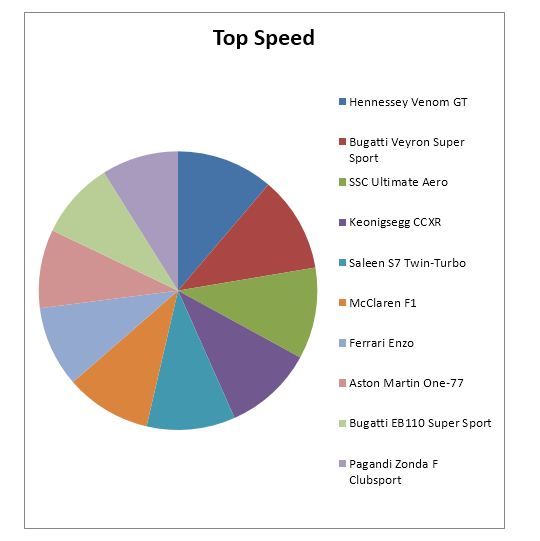 Not very useful is it? There’s too much data of a similar nature and the color key is equally confusing. You can’t tell very much about the cars and their relative speeds from a pie chart.

Whereas here’s the same data set represent as a bar graph: 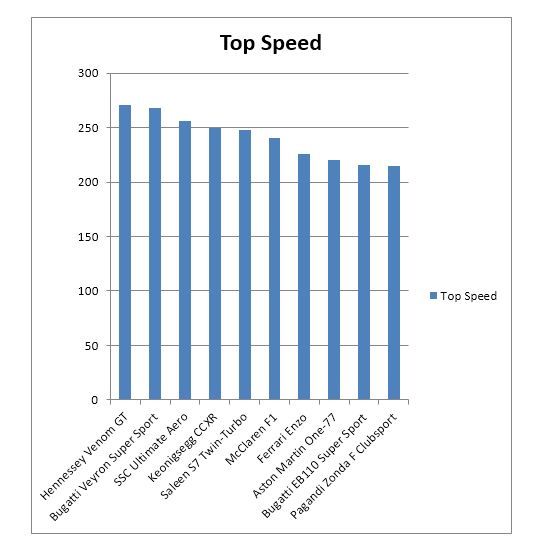 It is instantly clear from the bar graph which vehicle is the fastest and which is the slowest and how each compares to every other vehicle.

So let’s take our original data set and expand it to include the horsepower of each vehicle.

Again, there are many different ways to represent the data. We’ve chosen a an area driven graph with the two data sets imposed on top of each other. 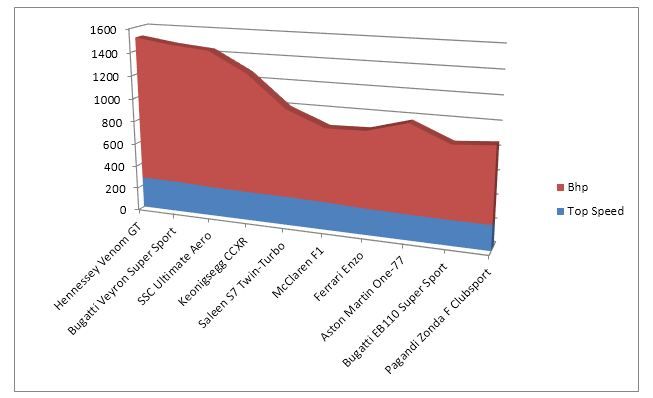 From this graph it’s very easy to conclude that while the speeds of the vehicles don’t vary dramatically – the horse power of each vehicle does. Yes, there’s definitely a case to be made that large amounts of horsepower do correlate with speed but it’s only a weak correlation. The McLaren F1 is faster than the Aston Martin One-77 but carries markedly less horsepower, for example.

It’s worth noting that caution must be taken when choosing bivariate representations. In this graph, we have focused our attention on the horsepower of the vehicles and the similarity between the top speeds of the vehicles. However, there is greater variation in the speeds than you can tell by glancing at the graph – it serves our purpose for analysis but is not necessarily the perfect representation for other purposes.

It could also be argued that the third-dimension, in our representation, adds little value to the viewer and could be eliminated in favor of a flatter representation. 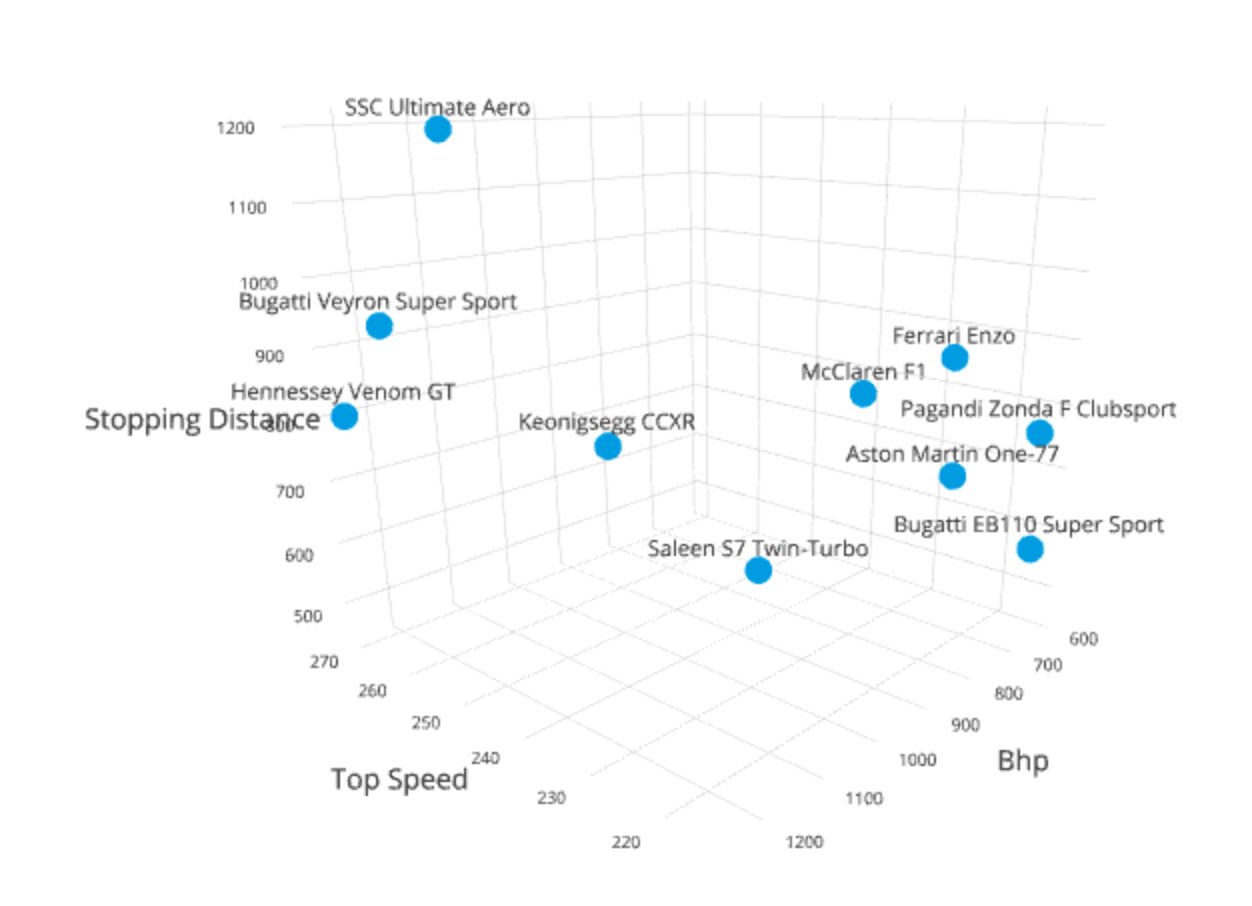 Once again trivariate data can be represented in any number of ways. However, a common methodology is the 3D scatter plot as shown above.

Again, caution must be taken when choosing the representation for trivariate data sets. Two common problems with models here are occlusion (where one item in a data set is obscured by another – so you cannot see its actual place in the model) and the fact that it can be hard to determine where, exactly, along any given axis the data point lays.

It’s for this reason that trivariate models are often interactive and can be manipulated by the user to be viewed from different angles in order to gain a better understanding of the data.

There is no usual reason to create your models by hand; most spreadsheet packages (such as Excel) can create univariate and bivariate models with ease from tabulated data. There are also specialist software modeling packages for more complex models including trivariate data sets.

The key to creating visual representations of linear data is to ensure the usability of the final representation. Fortunately, you do not have to create these models “from scratch” but can use computer tools to do the job for you. This allows you to quickly switch between models until you find one that is fit for purpose.

10 Fastest cars in the world.

Join 309,362 designers who get useful UX tips from our newsletter.

Information Overload, Why it Matters and How to Combat It
Designers often need to convey information to the users of their designs. Specialists in information visualization desig
Read

Information Visualization – A Brief Introduction
Have you ever thought about how much data flows past each of us in an ordinary day? From the newspaper you read at break
Read

Guidelines for Good Visual Information Representations
Information visualization is not as easy as it might first appear, particularly when you are examining complex data sets
Read