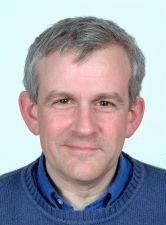 David W. Murray (M'93) received the degree in physics (with ﬁrst class honors) and the Ph.D. degree in low-energy nuclear physics from the University of Oxford, Oxford, U.K., in 1977 and 1980, respectively. He was a Research Fellow in physics with the California Institute of Technology before joining the General Electric Company's research laboratories in London, where his primary research interests were
in motion computation, structure from motion, and active vision. He moved to the University of Oxford, in 1989, as a University Lecturer in engineering science and a Fellow of St Anne's College. Since 1997, he has been a Professor of engineering science with the Department of Engineering Science, University of Oxford. His research interests continue to center on active approaches to visual sensing, with applications in surveillance, navigation, telerobotics, and wearable computing. Prof. Murray is a fellow of the Institution of Electrical Engineers in the U.K.