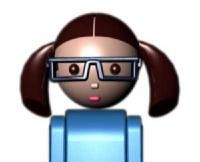 Carla Diana is a creative professional who tries to live as close to the near future as possible. As Associate Director of Interaction Design at Smart Design, her projects include domestic robots, mobile devices and sentient kitchen appliances. She is the founder of teh Smart Interaction Lab. In addition, Carla maintains an independent practice which includes a line of digitally distributed furniture, a series of sound-based sculptural installations and a selection of pieces that are best described as dynamic "virtual objects".

Prior to Smart, Carla was a Senior Design Technologist at frog design, Creative Director at Planetii, Interface Guru at Sarkissian-Mason, and Designer at Karim Rashid's studio. Early in her career, she led a product design research lab within the Good Housekeeping Research Institute. She is the creator of interactive sound project Repercussion.org.

Carla holds an MFA in Design from Cranbrook and a Bachelors in Mechanical Engineering from Cooper Union. From 2002 to 2007 she was Professor of Interactive Design at the Savannah College of Art and Design and from 2007 to 2008 was Visiting Assistant Professor of Industrial Design at the Georgia Institute of Technology. She has written for several publications including Interactions, Core77, The AIGA Journal, and Good Housekeeping.