What is Emotional Design?

Emotional design is the concept of how to create designs that evoke emotions which result in positive user experiences. Designers aim to reach users on three cognitive levels—visceral, behavioral and reflective—so users develop only positive associations (sometimes including negative emotions) with products, brands, etc.

“Everything has a personality: everything sends an emotional signal. Even where this was not the intention of the designer, the people who view the website infer personalities and experience emotions.”

Professor Alan Dix explains why considering emotions is vital when you design experiences.

As a designer, you focus on users’ needs in their interactions with your products or services. It’s logical that the functionality you design should help them achieve their goals as efficiently and effectively as possible. But you also have to focus ontheir responses, which are naturally emotional. As rational as we may like to think we are, emotions are at the heart of how we interpret reality. Positive experiences drive curiosity. They help motivate us to grow as individuals. Negative experiences help us prevent repeated mistakes. However, these not-so-positive experiences can sometimes be fun—consider the chilling thrills of horror movies. Likewise, users associate feelings with what they encounter. They also have tempers; some get frustrated faster than others. The fact is that the emotional design of a product or service affects its success—and thus the bottom line. Whether or not they realize it, users have sophisticated thought processes going on most of the time. So, you must address three levels of cognitive responses when you design: 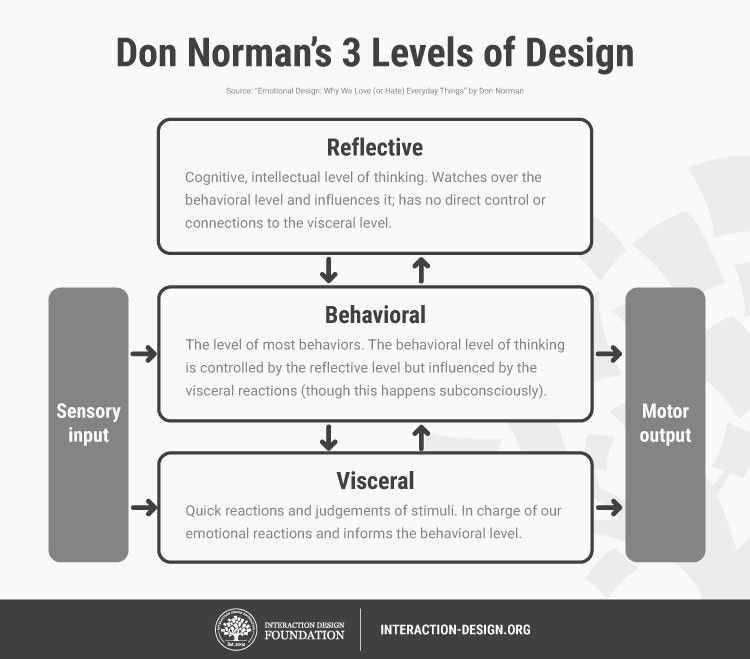 How to Apply Emotional Design 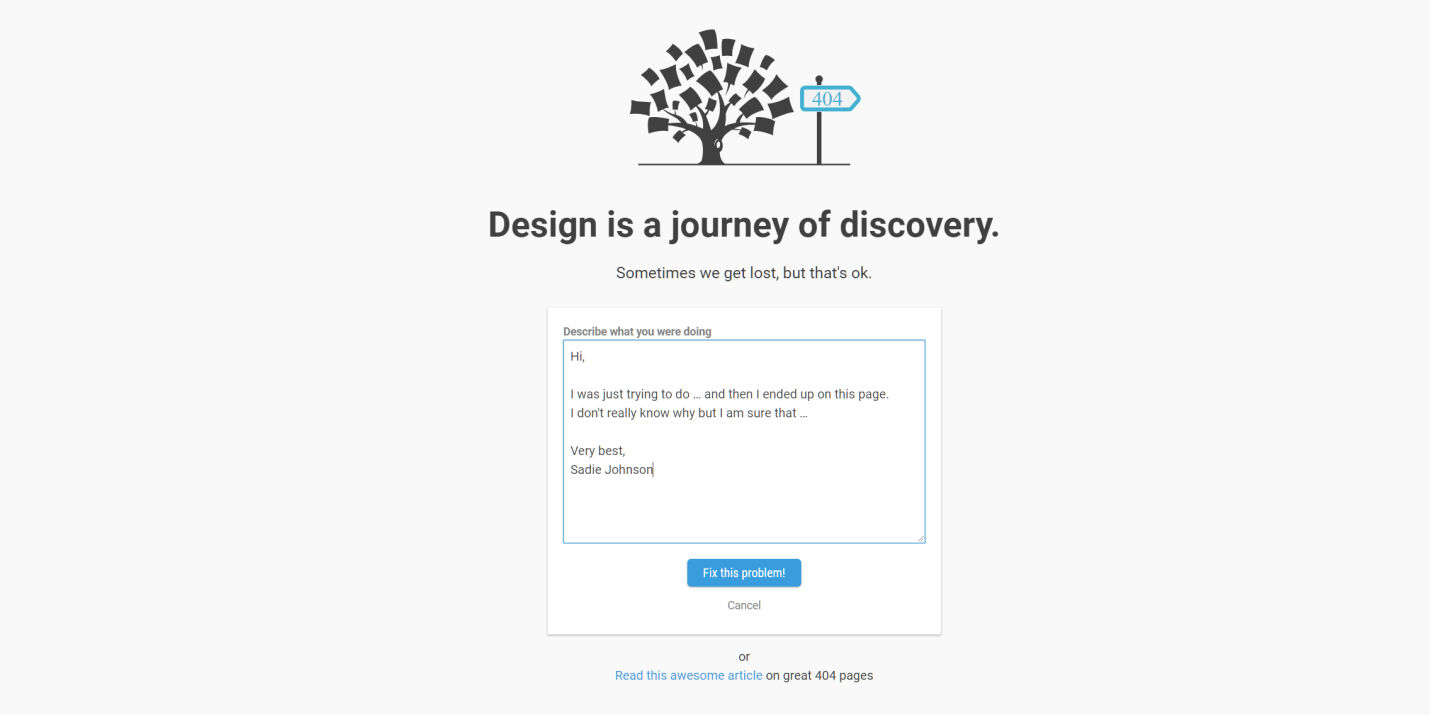 On the Interaction Design Foundation’s 404 error page, we use light-hearted language to try to alleviate frustration—and a small treat in the form of an article on great 404 pages.

Above all, to creative positive emotional engagement, you must have a friendly presence in your design—to show users you know them. Reinforce this with happy customer testimonials and pictures of your office/team. Your design should look different from competitors’. It should also feel different, as a reliable, pleasurable part of users’ lives. Attractive designs that accommodate users’needs and feelings give the impression they work better, too. Whatever the emotions your design conjures in users, these feelings will affect the bottom line. Even a minor oversight can trigger the wrong impression overall.

This blog is loaded with industry insights and examples: http://blog.teamtreehouse.com/emotional-interface-design-the-gateway-to-passionate-users

For an insightful view of Emotional Design from the Grand Old Man of User Experience himself, Don Norman, read his book on the subject: https://www.nngroup.com/books/emotional-design/

Here’s the entire UX literature on Emotional Design by the Interaction Design Foundation, collated in one place: 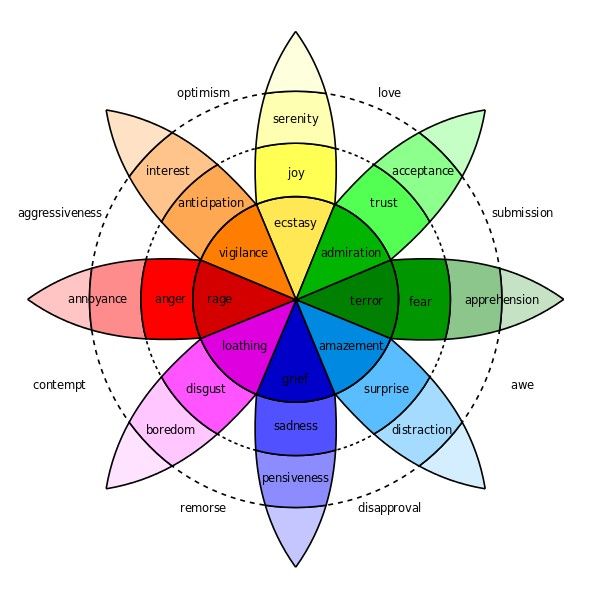 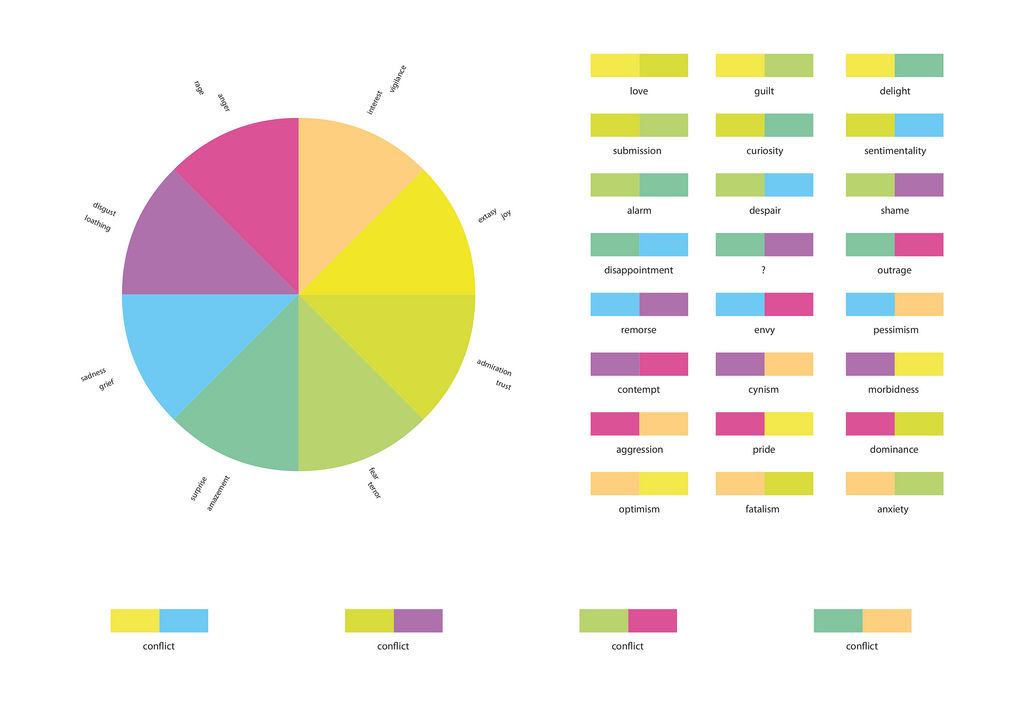 Course: “Emotional Design — How to Make Products People Will Love”

You can find several emotional models here on Wikipedia here.

User Experience and Experience Design
I open my eyes. Lush light floods the room, birds chatter. It is only 6:30 o'clock in the morning, but I feel well-reste Book chapter
Read book chapter

Self-Actualization: Maslow's Hierarchy of Needs
The things we use and consume may satisfy the first four levels of needs in Maslow's hierarchy of needs, but they will n
Read

Our Three Brains - The Reptilian Brain
Neuroscience has offered many important insights into both the structure and function of the human brain. One of the mos
Read

Norman's Three Levels of Design
In the human mind there are numerous areas responsible for what we refer to as emotion; collectively, these regions comp
Read

Putting Some Emotion into Your Design – Plutchik’s Wheel of Emotions
Emotional design is a big buzz word within the UX community. Designs which tap into the user’s emotions are considered t
Read

The Concept of the "Triune Brain"
In the 1960s, American neuroscientist Paul MacLean formulated the 'Triune Brain' model, which is based on the division o
Read

Our Three Brains - The Emotional Brain
In 1952, Paul MacLean introduced the term 'limbic system', which refers to the interconnected brain structures responsib
Read

Creating Emotional Connections
People form emotional connections and associations with the things they use and come across throughout their lives. Thes
Read

Three Common Models of the Brain to Help You Develop Better User Experiences
There are many different conceptual models of the brain. It’s important to note that many of them lack any scientific ba
Read

Our Three Brains - The Rational Brain

Our Three Brains - The Rational Brain
The triune brain model may not be an entirely accurate depiction of the human brain and its development, but the concept
Read

Aesthetics and form need to hold hands
This article examines two closely related ideas that are both about looks. Our design world revolves around nice images/
Read

Emotion and Design
Factors specific to the things we use in our everyday lives influence how we feel when we are using them. It is, therefo
Read

Emotion and Design: Affect and Design
“If the product is something fundamental to life and well-being, then the proper response is to ignore continual shifts
Read