The Membership Certificate below verifies that Irene Au is a member of Interaction Design Foundation. 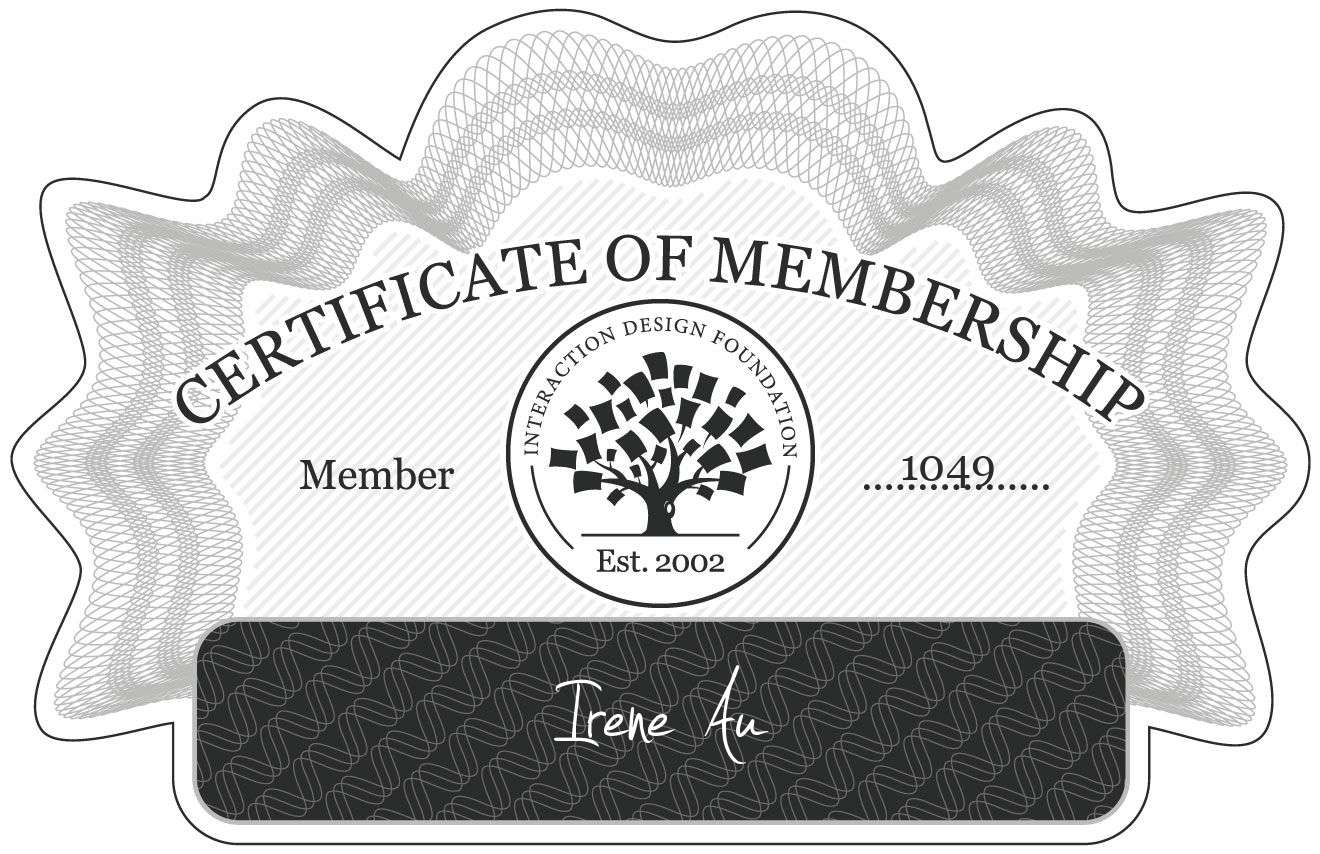 With 93,230 graduates, the Interaction Design Foundation is the biggest online design school globally. We were founded in 2002. Every member is awarded a Course Certificate (with its own unique permanent URL) once they complete a course with us.

Irene Au
Design Partner at Khosla Ventures
San Francisco United States
Irene is the former head of UX and Design at Google. Currently, she is an operating partner at Khosla Ventures, where she works with portfolio companies to make their design great. She is dedicated to raising the strategic value of design and user research through better methods, practices, processes, leadership and quality. Irene does this by building high performing teams, establishing design practices, mentoring and growing the next generation of great designers and directing the design of interfaces and experiences. She drives strategic discussions at the highest levels of companies, focusing first on user needs to inspire product innovation.A lifelong gadget girl and math and science geek, Irene built robots in college and went to graduate school at the University of Illinois at Urbana-Champaign to pursue studies in electrical and computer engineering. There, she found herself surrounded by young men who built technology for the sake of technology; however, Irene’s passion was to build technology inspired by people’s needs directed at solving real problems, so she carved her own path. Through coursework in engineering psychology and human factors, computer science and industrial engineering, she created her own program of study in human-computer interaction (HCI) during a time when studying HCI was unheard of. Irene then went on to be among the first designers with such a background in the consumer Internet space and began her career as an interaction designer at Netscape Communications.After Netscape, Irene joined Yahoo! in 1998, where she established Yahoo’s user experience design practice and led the team for eight years. In 2006, Irene joined Google and led the user experience team there for six years, where she was responsible for design and research for all Google-branded products worldwide. Following Google and prior to joining Khosla Ventures, Irene ran product design at Udacity.Irene also teaches yoga and meditation at Avalon Art and Yoga Center, one of Palo Alto’s oldest and most established yoga studios. She co-chairs the board of trustees at Bowman International School, a K-8 private Montessori school in Palo Alto, Calif.Irene holds a bachelor’s of science degree in electrical and computer engineering from the University of South Carolina Honors College summa cum laude and a master’s of science degree in industrial engineering and human-computer interaction from the University of Illinois, Urbana-Champaign.
View profile